The Curious Case of the Silver Buttons

Jedd
April 2020 edited April 2020 in Real Time Quests (IC)
The wizard and the rogue pushed past the door, stepping into the small, yet sumptuously-designed outpost, a little worse for wear after a hunt in the troll woods, but still in one piece. 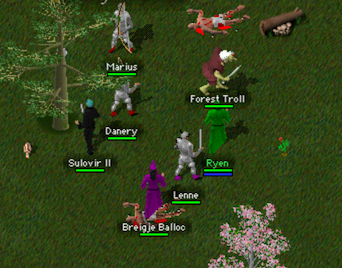 A guard stood watchfully at his post by the window, which offered a sweeping view of the busy port. To his right, at the table, sat a funny-looking man dressed in simple, light-blue clothes. Without a doubt, this was the man that they had come all this way for.

“Ahoy,” said the rogue, while the wizard hovered just behind.

“I be Ashley. Treasurer here fer the Southwest Sailors.” Ashley pointed to a pair of open chairs, and gestured at the two to sit.

“Treasurer, eh?” Sul said, while the two of them pulled up a chair. “What sort of company is this?”

“We be a simple, honest shipping company. Our venture first set sail in year four fifty. Port Gast do be a fine place fer a company like ours to build a headquarters.”

The wizard cleared his throat. “Right. Well, my name’s Ryen. Let me cut to the chase - we’ve heard about some… unique… trades you’ve got going on here. Involving tokens.”

Ashley grinned. “Aye, we do have something fer ya, matter o’ fact. We got a client lookin’ fer ‘em. Some real nice ’n shiny, iridescent ones. We can offer ye payment, o’ course.”

“Fer right now, we ‘ave a surplus o’ silvery buttons. They say these lil’ shinies used to be the key to get inside the D.D.D’s ol’ headquarters.”

“It’s true,” said Ryen. “Amere and Jedd got tortured in those headquarters, once. Or something like that. They’re both a little too traumatized to remember.”

“Don’t think the buttons work that way no more,” said Ashley, “but I can let ye in on a lil’ secret.” Ashley cast a quick glance over his shoulder, and lowered his gravelly voice. “There be a fella not far from here, in the bear’s dens, who works fer the Hand…. word is he’s lookin’ to collect these ol’ buttons. Just a bit o’ hearsay.”

“We don’t want no trouble with the law, ye hear? We be simple, honest businessmen.”

“So some of us had some, er, checkered pasts. What be wrong with turnin’ o’er a new leaf?”

“Nothing,” said Ryen. “Nothing wrong at all. Leaves are meant to be turned! And if we find any of those tokens, we’ll be sure to swing by. But for now… it was a pleasure!”

Ryen nodded his farewell and quickly followed the rogue out the door. Outside, the rest of their party awaited in a narrow, gritty alleyway. They were promptly brought up to speed by the rogue and the wizard – with a collective gasp arising at the mention of the Black Hand agent living inside the bear dens.

Ryen couldn’t help but laugh. “And infiltrate the Black Hand, sure!”

“We’ll have to get our brigand costumes,” said Sul.

“Yes… we’ll need to visit Lerilin to make that happen. Plus, it’s the closest, ‘safest’ place to here.”

So off they went, following the path to the Lerilin Bridge. Along the way, their numbers were augmented by Amere himself.. At length they reached the blazing lights of the fishing village at festival time, and started to make their preparations.

“Can we not dress up as brigands?” asked Amere.

“I’m fine with that,” said Ryen, with an intentionally big smile. “Provided you pretend to be my prisoner.” He stepped over to his bank box, and started rummaging through it. “Just need to find my red robes, to make the brigand mage outfit work.” Eventually, he did find them, at the very bottom of the chest. Thankfully, there were two identical pairs. He set one aside to give to B.B., and started to change.

After an extended detour at the hall of the Mirith Vanguard, the group finally began to approach the rocks of the bear dens. No sooner did they get there, then they were ambushed by a small squadron of brigands. 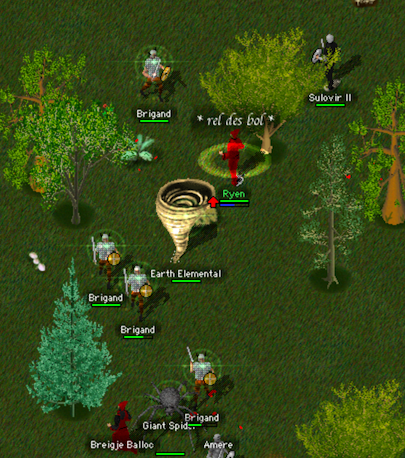 “Stop, brothers!” Ryen yelled at them, but stop they did not. He was forced to paralyze them. “Mutiny!”

A number of the thugs started going after B.B. and the others, so Ryen had no choice but to start flinging around his unforgiving lightning bolts. “You grunts will pay the price for this insolence!” he yelled out. But before too long, the last brigand was felled, and the chaos was over as quickly as it had begun. 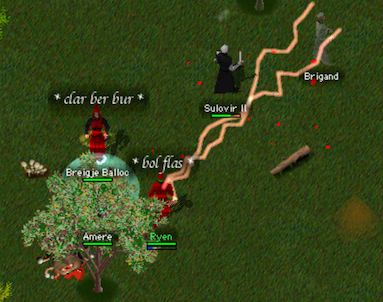 Sul stooped down to the grass and started to wipe the blood of his dagger. “So do we tie up Amere now or later?”

Amere glared at the wizard. “Later.”

The conversation was then rudely interrupted by a gaper, and a few more brigands who had been lurking further away.

“I am your SUPERIOR OFFICER!” Ryen shouted out, filled with utter disgust.

“Stand down or I’ll have your head!” shouted Sul.

And so they did. Finally, they had reached the mouth of the bear den in question, and there was not another brigand in sight. Once they were doubly sure that there were no others hiding in the trees, they started to poke around. Immediately, Sul located a chest and removed the locks and traps protecting it.

“Silver button,” he said. “And a wardrobe. Oh. Amere!” he shouted out. “I have something for you.”

At this, the rogue hoisted up a few mismatched pieces of armor: a chain mail breast, a pair of leather legs, a set of black boots, a viking helmet, and a classic long sword. Suddenly, it all made sense.

“Aww,” said Ryen. “Guess I don’t get to imprison you after all.”

Sul flung the wardrobe at Amere. “Get dressed, prisoner.”

This time, Amere did as told, and started to piece together the infamous, patchwork armor set.

“I guess you are now our… personal guard?” said Sul.

“That… works, “ said Ryen, with audible disappointment. “And Sul is our assassin then, great!” 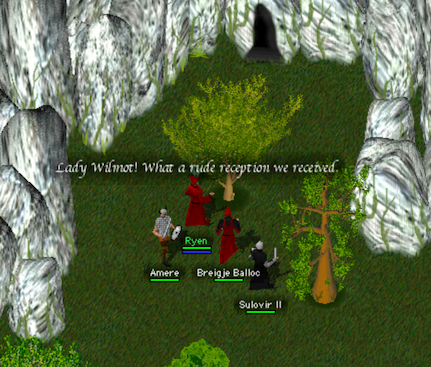 Neyr cleared his throat, adjusted his hat so it was extra tight, and held his chin up just ever so slightly. “Lady Wilmot!” he said, voice piercingly high. “What a rude reception we received. I demand to speak to this squadron’s commanding officer NOW!”

Sully gestured to the mouth of the cave. “After you, sir.”

Neyr sighed. “I suppose we’ll receive a similar reception inside. In we go then!” 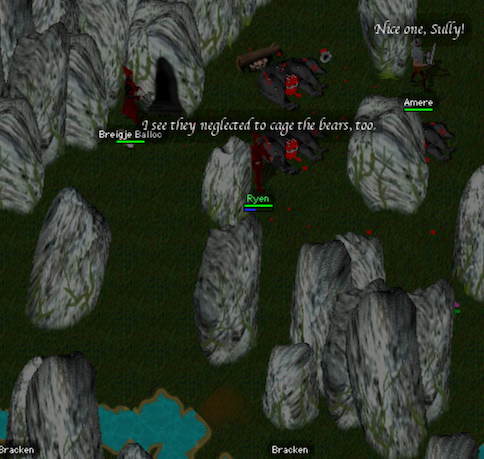 The reception was, of course, exactly as predicted. Packs of bears, groves of bracken - an all around masterclass in poor hospitality. As the fighting dragged on, their new recruit began to complain about the weight of his found longsword, and begged in vain for words of affirmation, but Neyr and Sully were having none of it. Nevertheless, they pressed on, burning their way through the many trees, and forging their way through the narrow creek, until at last they came upon the secluded, forgotten grove where a humble little cabin lay nestled against the rocks… and where a very un-humble compound lay buried underneath.

The party of four entered without incident, even discovering a chest full of reagents and tools and potions to help replenish their supplies. Master Neyr could not help but think how much of a relief it provided, after wave upon wave of hostile reception. 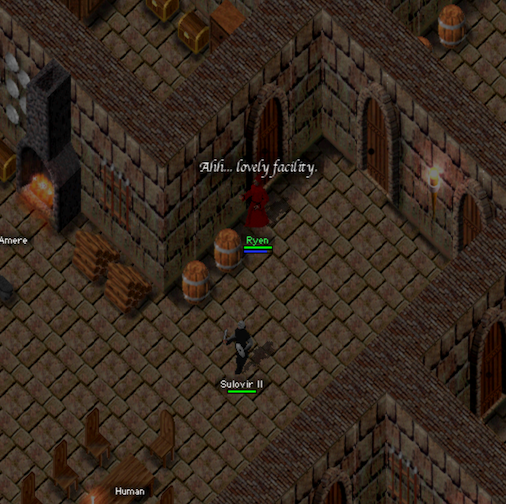 In the very far end of the compound, past the dormitories, past the long, long table, and into the classrooms, they could hear a person shuffling about. 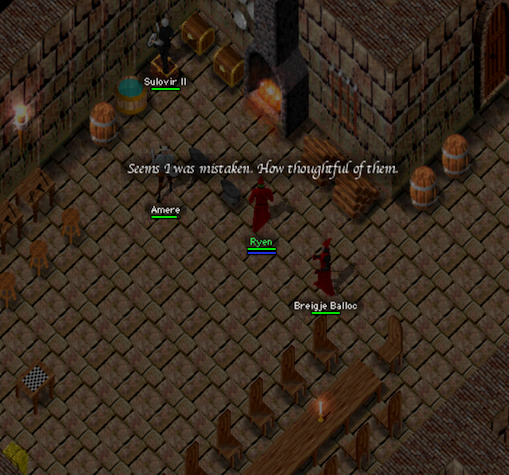 “Yes, Master Fyod,” said Master Neyr, as he took a sip from one of the potions in the supplies chest. “His failure in the 448 campaign is legend. He couldn’t capture that fool Lushe Satel!” He took one last sip, and once everyone was ready, they stepped into the library to commence with the interrogation. 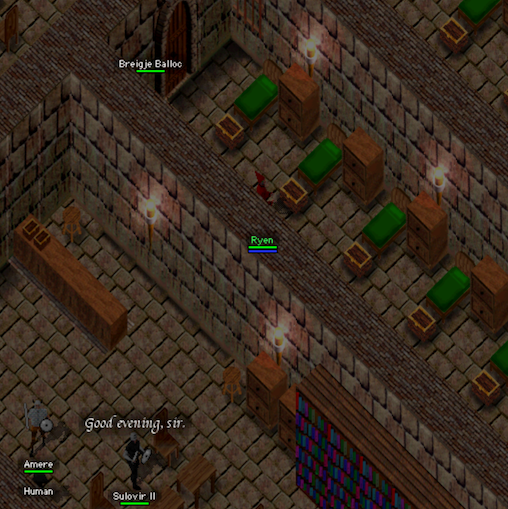 “Greetings,” Fyod called out to them.

“Hello,” said Sully. “We have completed the quest.”

“Hmph,” said Fyod. “Which one? I need to collect buttons for a personal project. And I still need crystals for my Major.”

Sully nodded. “We have acquired some buttons.”

“Good, are they the silver ones the bloody Diabolicals used to use? I can make it worthwhile.”

“Yes,” said Master Neyr. “What project is this, again?”

“I think the buttons may still be of some use,” said Fyod. “And the D.D.D. just threw them all away!”

“Bloody fools,” said Fyod. “We in the true Black Hand may be down, but we are not out!” 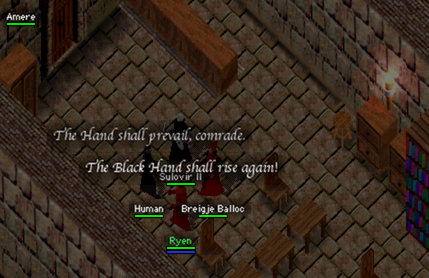 “Aye. Here are those buttons, then,” said Sully as he passed them over.

“Good,” said Fyod. “Now, let’s see your insig… you lost it again?! Bah, have another then.”” Fyod breathed a heavy sigh, before opening up his pack and handing something to Sully. 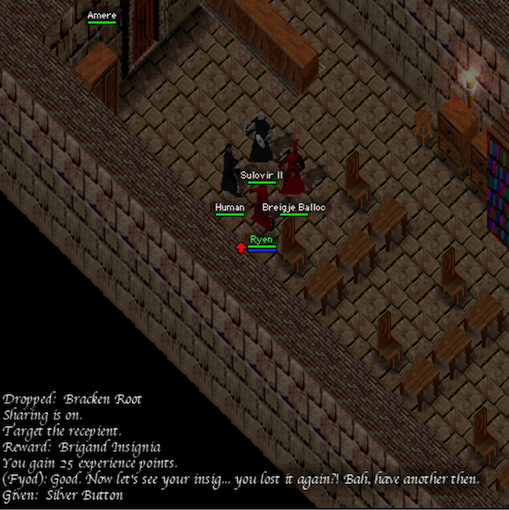 “Ah, thank you.” Sully grabbed the object. “I did happen to lose my brigand insignia. These robes get torn up all the time.”

“Uh…” said Master Neyr. “Yes, yes he did. If it weren’t for those darned bears…”

Lady Wilmot shook her head. “Let that be a lesson not to lose again.”

Master Neyr managed a smile. “Very generous of you, my good Fyod!”

“Aye,” said Sully. “And those crystals, I forget…”

“Bring me twenty crystals, and I’ll make it worth your while.”

A flash of movement by the door caught Master Neyr’s eye – there was that recruit, beginning to pace the floor. Master Neyr waited for a moment where Fyod’s head was turned, and then snatched another insignia off of the desk. “You there, grunt!” Master Neyr called out.

“Huh?” the grunt stopped dead in his tracks.

“Sorry, sir. I don’t do well underground. With the space. Can we get going?”

“Hmph,” said Master Neyr. “Seeing as we don’t have the crystals, that may be for the best.”

Sully nodded. “I think our business is finished here.”

Fyod called back out after them: “The Hand shall prevail, comrade!”

The four of them departed the cave, and put a great number of paces between them and Fyod before they started to talk about removing their costumes. But apparently, they didn’t wait quite long enough, for as they reached the hall of the Mirith Vanguard, they were ambushed by a single brigand, who said he’d heard something about “taking the costumes off”. Unfortunately for him, he did not live to tell the tale.

Sul wiped the sweat from his brow. “I think the green hair gave it away, to be honest.”

Ryen took of his hat, and ran a finger through the dirty, green mess of hair. It was definitely long enough now to extend past the back of the hat, too. Oops.

There wasn’t much time to dwell on the mistake, though, as there was one final stop on the long, long quest: to the cave of the lonely golem, far, far to the north. There, they would find out once and for all what could be done with the peculiar brigand insignias.