Summer in Lerilin is always a spectacular occasion. The simple and quaint refrains of quiet village life, which once repeated unchanged all year long, now give way to the frenzied and unpredictable syncopations of festival time. For a short while, at least, the village transforms into something bigger, louder, and quite a bit brighter. And yet, underneath it all, down beneath the hubbub and spectacle, the heart of our ancient traditions keeps beating on. This clash—between the ancient and the modern, the sublime and the ridiculous—is at the core of what makes our beloved Red Moon Festival so special. Truly it is a sight to see! (And quite a busy time it can be for us, too! Thus, this issue is free of charge. Our deepest apologies, dear readers, for the delay!) So breathe in deep, and take in the invigorating air of The Lerilin Breeze!

The birds were chirping, the trees were awakening, and the fields were all abloom with the verdant bliss of spring. We hope the rainy season was not too hard on you, and we welcome you back to the beginning of a new year and all the new promise it brings. So breathe in deep, and take in the delightful, invigorating air of The Lerilin Breeze!

THREE THINGS YOU NEED TO KNOW NOW:
1) Mirith, still rebuilding from the damage brought by the Sleeping Invasion this last winter, was the target of another assault, this time by a trio of maniacal liches.
2) A fierce tempest, now known as the “Relic Storm”, struck Foehan and Mirith under the Waking Moon, causing the loss of several important relics from Brigobaen that were being transported as part of the annual Dawn of the Disciples pilgrimage. These were eventually recovered with the assistance of Mirith, though questions remain.
3) The pilgrimage itself enjoyed a successful and miraculously peaceful moon, not counting the stormy incident above.

GOOD SEASON FOR:
1) Rose collectors, after a large number of the rare flowers were recorded in Andris during what the city calls the “Vernal Lotus Superbloom”.
2) The Andris Birdwatching Society, whose beloved springtime tradition of welcoming the birds back to the north was aided by a drier-than-expected rainy season.
3) Duldrus, whose young guardforce was funded for another year with the generosity of donors during the Dawn of the Disciples pilgrimage.

BAD SEASON FOR:
1) Mushroom haters, after the weather patterns this spring caused a veritable explosion of mushroom growth.
2) Farmers, as a record number of forager ants helped themselves to crops throughout the continent.
3) Mirithians, who just can’t seem to catch a break!

We will embark upon our new issue, dear readers, through a journey of pictures and sketches. The vibrant, floral, and dew-kissed tones of spring deserve no less!

We begin at the start of the new year, as the moon wakes. The gathering of donations for the annual philanthropic Dawn of the Disciples pilgrimage has in recent years taken on a more organized, almost militant, fashion, with a completely sheltered staging area being a new, prominent sight at the gates of the temple. 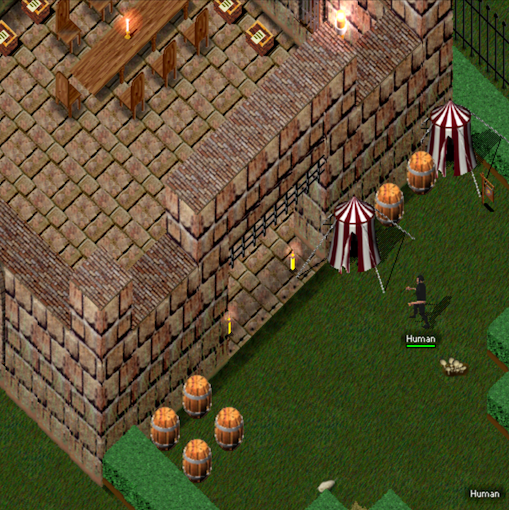 Chef Jesper minding the Dawn of the Disciples staging area.

Per our sources in the temple, the donations this year focused most heavily on the towns of Duldrus and Port Gast. A mysterious and silent “Purple Shirt Donor”, so named for the purple shirts that they leave with their donations as a “signature” of sorts, is reported to have single-handedly saved the Duldrus guardforce for another year, via an eleventh hour donation.

That young Duldrus guardforce still appears to rely on donation-funded salaries from the temple, lacking financial support from the coffers of Mirith. Mirith, who claims the far-flung mining town as part of her empire, has historically been slow in committing resources to the defense and maintenance of the town, to say nothing of improvement. Though of course, this trend may now be reversing with the leadership of Lord Rengal, Duke of Duldrus, who conducted the training campaign that allowed for the guards to be hired in the first place.

Putting political intrigue aside, let us now examine the course of the pilgrimage itself. Unlike previous years, the pilgrims managed to provide for their own defense this year, forgoing the need for the boisterous escorts that have come to mark the annual occasion in the past. Miraculously, no major attacks or robberies were reported.

But in spite of this success, not all went as planned—as the pilgrimage stopped in Foehan, crisis struck: a rare inland storm of epic proportions battered the campsite, causing a number of priceless historical relics to be scattered to the nine winds, and sending the pilgrims into disarray. Mother Johanna, of the spiritual directing ministry, and Mother Aerrin, a prominent figure in the temple’s educational ministry, took the charge in recovering the lost items. While Johanna guided the recovery efforts at the camp, Aerrin high-tailed it to nearby Mirith and enlisted the help of local adventurers. 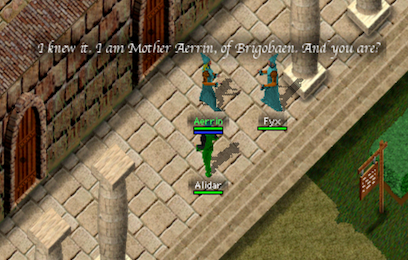 A portrait of Mother Aerrin of Brigobaen, who coordinated the relic recovery effort.

Adventurers in Mirith did not need much convincing, for the so-called “Relic Storm” would soon reach their very walls, buffeting the east gate with torrential winds and rains. 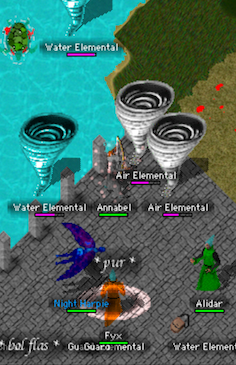 The Mirithian force came to Foehan as soon as they were able to break through the storms. By this time, Mother Johanna had already managed to recover quite a few relics. But at least three relics were still missing:

1) The Staff of Paulena, ornate yet sturdy, said to be wielded by the Wandering Disciple herself in ancient times, the only one of the Seven Disciples who never became associated with a particular city or location.
2) A Statue of Elara, rather small, more like a statuette, but timeless nonetheless.
3) A Lock of Hair—apparently once belonging to Elara herself! 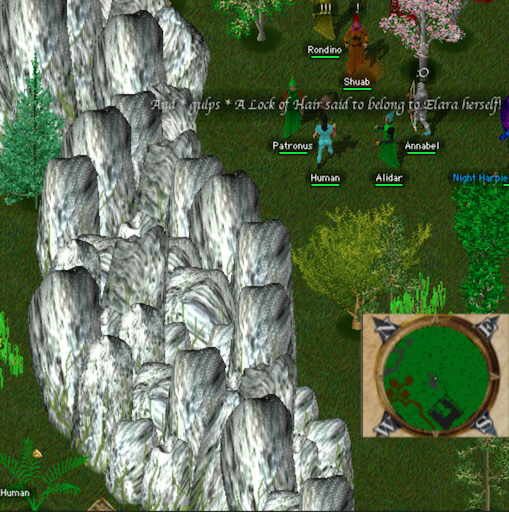 Chasing after the clues left behind by the clouds and storms, the adventurers of Mirith embarked on a wild chase throughout the Foehan backcountry.

The Staff of Paulena was found southwest of the Foehan camp, apparently having been washed away into the perilous creeks of the bear dens. So great was the relic’s power, that ancient bracken are reported to have sprung up out of the banks on which the staff was found, with the fearsome trees claiming in their deep, booming voices that the staff had finally “returned” to them. 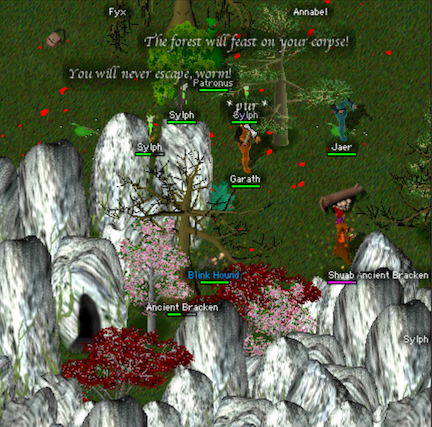 The hullabaloo that sprang up around the Staff of Paulena.

Whether the fascinating claims of the ancient bracken were true or not, the relic was returned to the pilgrimage camp. The Statue of Elara was then traced to a rocky outcrop. This relic was reported to have caused the very earth to quake and move, unleashing earth elementals and even a stone golem from the ground on which it rested. And lastly, the Lock of Hair was found along the banks of the Waking Creek—guarded by a flock of pixies.

All three relics were returned to the pilgrimage camp, and thus the crisis found its happy ending at last… or did it? Johanna reported that the opening inventory list became waterlogged during the storm, and thus the priests and priestesses cannot be too certain if everything was, indeed, recovered. 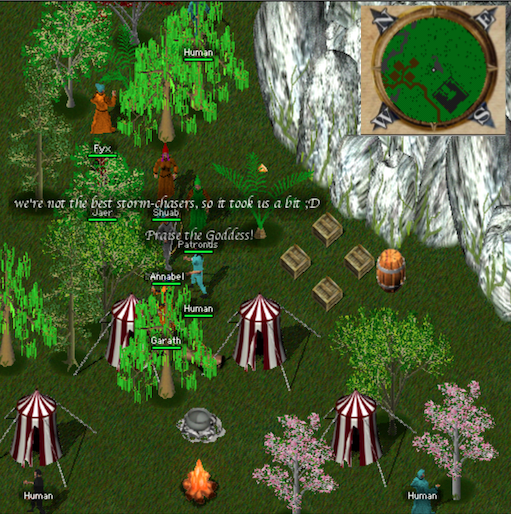 Peace and calm returns at last to the Foehan campground.

Nevertheless, the pilgrims did all they could, and the pilgrimage returned to the temple just in time for the Feast of Elara and the annual joyous springtime Egg Dance, amidst the gorgeous, lush hues of the Full Growing Moon. 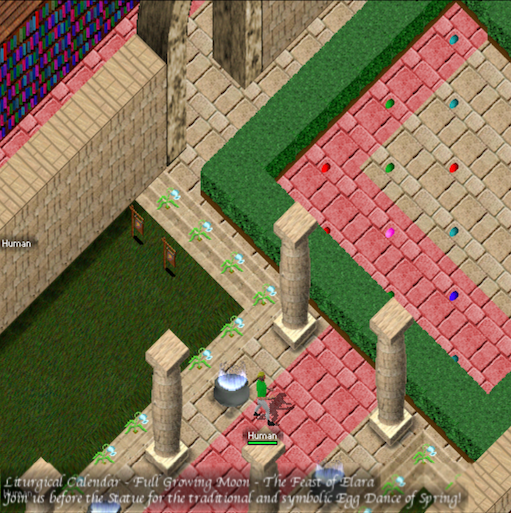 The Feast of Elara.

Meanwhile, while the pilgrims enjoyed their well-earned rest back at the temple, the forces of evil were at work back in Mirith. A trio of frightfully powerful liches wreaked their havoc under the full moon, causing great disturbances in the city, which was still repairing the onslaught of damage that was brought on by the Sleeping Moon Invasion of the very recent past. 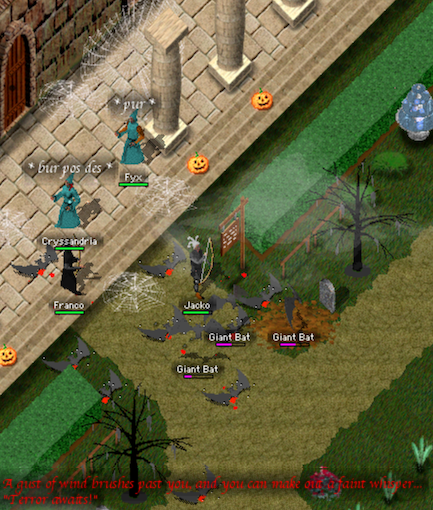 A scene at the Mirith bank under the Full Growing Moon.

But thankfully, the extent of the abominable liches’ machinations was largely restricted to the city’s cemetery, or rather, just south of it. There, a torturous maze of gruesome sights and scares awaited the city’s defenders. Casualties are reported to have been high. 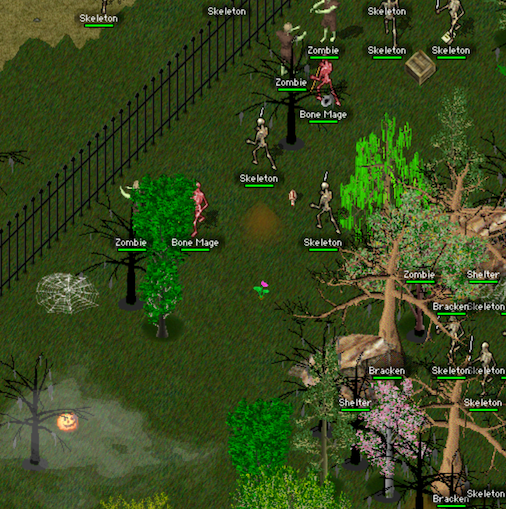 The liches’ fortifications at the Mirith cemetery.

Nevertheless, the city did prevail once again, demonstrating the grit of its citizenry and their admirable tenacity in the face of adversity after adversity. 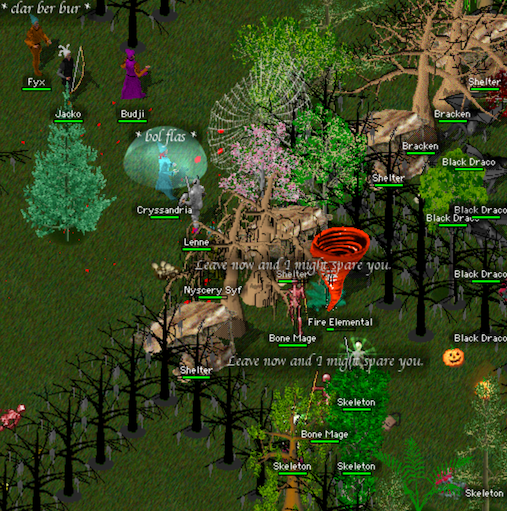 Fearsome foes, both alive and undead, awaited the defenders of Mirith.

To end on a lighter note: the annual Vernal Lotus Superbloom finally came to Andris in the latest phases of the Growing Moon, putting the Andris Botanical Institute, the Birdwatching Society, and many other observers at ease. The Andris continent is understood to serve as an important migratory stop for a wide variety of wildlife on their return journey north, and the Superblooms are used heavily by the traveling birds. But when the Full Growing Moon passed and the blooms were nowhere to be found, panic began to spread amongst observers who feared that the migratory patterns would be disturbed this year. The damage to the natural order that such an event would cause would be “catastrophic”, per the Institute. Thankfully, no such calamity will be occurring. 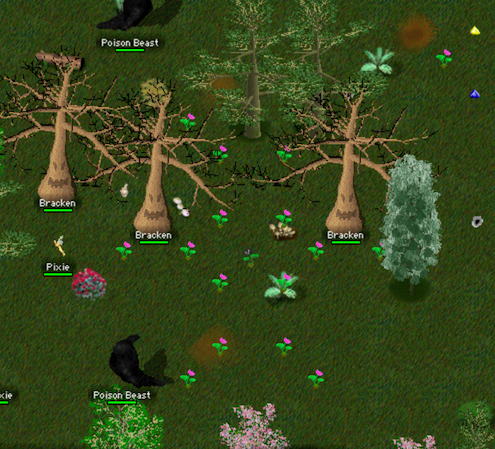 Better a late-bloomer than never!

We hope your dandelion wishes all come true, and wish you the warmest and happiest and most festive of summers. Until next time!