The_Hidden_Vale
March 2021 in Real Time Quests (IC)
Though the endlessly overcast skies made it fairly hard to tell, Ruxem figured it was just about noon when the commotion from outside interrupted his soothing cup of winterspice tea. A low, guttural, groan… followed by big, lumbering footsteps that seemed to shake the very foundations of the keep itself. By the time the rogue managed to pry himself off his nice and toasty seat before the roaring fireplace, the Vale’s trusty spiders were already scurrying out the gates. Ruxem dashed behind them, into the frosty air, only to run straight into the familiar figure of Lillium, decked out in royal blue and carrying a large pack, with a particularly large giant in hot pursuit. With a yelp, Ruxem reached for his pouch of explosive dust and tossed it dexterously at the fearsome beast. It stumbled backwards, and the spiders lunged for its throat. The hideous thing fell heavily to the ground, and the spiders leaped on top of it while Ruxem averted his eyes. It did not get back up.

“Spiders got my back,” Lillium said with a grin, before letting her heavy pack fall to the floor of the gatehouse with a thud. “Here. Take this stuff. I have no space.”

“Wow, thanks miss!” Ruxem said, not wasting a moment to swipe up the pack and pick through its contents, while the spiders feasted loudly on their fresh caught meal. Ruxem dug and dug, unearthing roses, tusks, eggs, rings… all sorts of goodies and trinkets that would make for a fine addition to the guild’s vast collections. After a minute, the rogue suddenly remembered he had company, and turned back to the cleric. “Need any top offs of anything?”

“Okay!” He closed up the pack and trotted back into the keep, gesturing for Lillium to follow. “So guess what?” he said as he entered the great hall, tossed the pack on the table, and plopped back down on his seat. “I just got done poisoning my own daggers! I almost died!”

“It’s like… a shocking amount of poison! Nobody told me how potent those things are!”

“Well, you learn something new every day. Thankfully, I was in reach of a really good potion.”

Just then, the sound of footsteps echoing on stone arose from the entrance. Another figure garbed in the finest blue, this one a man, strolled quietly through the gates. The spiders did not even seem to notice him as he walked right past them, and into the great hall. Only as the stranger drew near to the table did Ruxem notice the shiny new badge decorating the man’s robes, and suddenly it all made sense.

“Hey!” The man smiled, embraced Lillium, and then turned to Ruxem. “Rondino. Nice to meet you.”

“I’m Ruxem. You too!” Ruxem grabbed the newcomer’s hand and shook it vigorously. “I just washed my hands, that’s why they’re wet. No other reason, no poison or anything!”

“Uh huh…” said Rondino, before wiping his hands on his robes, and then walking off toward the armory. “Need to drop some stuff off. Be right back.”.

Ruxem turned to Lillium, who was trying in vain to stifle a laugh. “Well, Lill, here’s the plan. While you two go get ready, I’m gonna go sneak up close to the peak and scout ahead. And then you all can find Mr. J and then meet me there!”


The weary fighter stabbed his walking stick into the ground, crunching through the thin layer of fresh snow, and leaned forward to catch his breath. The barren foothills at the edge of town were almost behind him now, with their gently rolling slopes already beginning to cascade into the sharp, dismal, and craggy cliff faces of the Mountains of Duldrus. Ahead, the trail narrowed, meandering and spiraling round and round on its precarious path up the perilous peak.

Then, a loud crunch of snow from behind.

Jedd spun around, with just enough time to grab his shield and raise it against the oncoming swing of a massive club. The blow sent him flying back anyways, knocking his blade and several other items out across the snow-kissed field.

The giant growled and lifted its club – which was actually just a small tree – and then froze. Suddenly, flames burst forth around the giant’s feet, melting the patches of snow, and singeing and burning the giant’s flesh, as the beast whimpered in helpless pain, unable to move.

The fighter stole a glance to his side. It was Rondino, pacing forward, uttering an incantation with the glow of the flames reflecting in his eyes. Not far behind him, Lillium was running to catch up.

“Oh,” said Jedd, turning back to the writhing, foul-smelling giant. “I like that tactic.” The fighter jumped to his feet and swung at the giant, one time, two times, three, four… and then it was done.

Rondino gave a cheeky smile. “Next level strats. That’s what you get with Ron. Lilli!” The wizard spun around to face the breathless cleric. “Tell him about the Ron guarantee.”

Jedd couldn’t help but smile. “Good! We needed a good injection of higher wizardry around here, anyhow. Not more of that rugged street magic that Ryen practices.”

The fighter picked up his items that had fallen during the ambush, and set back on the path, the others close behind. “So,” he said. “You’re a wizard. How long have you been one?”

“Oh, yes.” The fighter did not even seem to notice the distant, foggy visions that danced like snowflakes before his eyes at the very mention of the word “memory”. Effortlessly, he dispatched the images of the clashing of steel and the avalanche of ice and snow. “Amnesia is never a cheerful thing.”

“Well, I do still remember my spells.”

“Yes,” said Lillium, laughing. “But he woke up in a guild led by a weirdo.”

“I’m not the—“ suddenly, Jedd cut himself short as he noticed an unfamiliar figure in black robes and black wizard hat, approaching from ahead. “Oh, hello there.”

The figure walked up slowly, stopping a respectful distance away from the trio. “Hello,” he said in a flat monotone.

“Friend or foe?” Ron hollered out.

Jedd put down his blade and removed his helmet, a decision he instantly regretted once he felt the biting air. “I… thought you were Lord Satyricon, for a brief moment… what message have you, sir?” 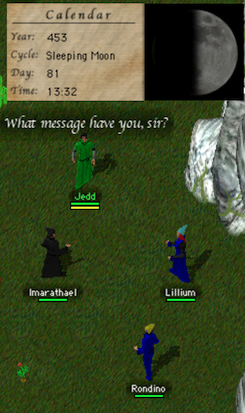 The messenger shook his head. “I have long since deserted my true calling. I will never match him.”

“Oftentimes we stray from our path, yes…” Jedd said. “But which ‘him’ is this, might I ask?”

“Oh, silly me. My mind does not work as quickly as you wizardfolk.”

“So…” said Rondino, looking the stranger up and down. “You’re not one of them necromancers, are you?”

“To whom do we owe the pleasure of speaking, then?” said Jedd.

Jedd squeezed his eyes shut. “Imarathael… Imarathael…” Why was that so familiar?

“I doubt you have heard of me.”

But hadn’t he? Sometime, somewhere, on a dusty old shelf in some isolated library? But where? “The name rings only the slightest bell in my mind,” he said. “I am an avid reader. It will come to me, with any luck.”

Lillium cleared her throat. “So, you said you have a message…?”

“Oh yes.” Imarathael turned to the fighter. “You’d be Jedd?”

“May I borrow you for a moment?”

Jedd felt a sudden pang of fear course through his veins.

“We’d prefer to stay with him,” said Lillium, before quickly casting a few protective wards around the fighter, which offered a brief and very welcome hint of warmth.

“I… would prefer that as well, though I would be happy to be of service, I… Imarathael.”

“It will only take a moment.”

Lillium narrowed her eyes at the stranger. “Make it snappy!”

“Hold on a second,” said Ron. “Where would you be going?”

Imarathael unbuckled his pack and tossed it on the frozen grass before the wizard’s feet. “Sit on that if you don’t trust me.”

“I suppose I’m worth roughly that many dragon teeth.” Jedd said, before lowering his voice to a whisper. “But stay wary.”

At that, the fighter followed the strange wizard as they traced their footsteps back down the path, while the other two looked on with unwavering eyes. The fighter and wizard walked just out of sight, back to the outskirts of town, before they were suddenly ambushed by gapers.

“Five?!” Jedd shouted out. Yes, not one, not two, but five. He would have been most concerned, and far more suspicious, if it weren’t for the fact that the gapers only seemed to have eyes for Imarathael. And so the fighter danced between them with ease, slicing stalks and shuttering eyelids with his trusty glaive, staining the snowy field with blood. And then it was quiet again.

“Bloody eyeballs,” said Jedd, as he looked over the field of the skirmish with disgust. Somehow, over the course of the brawl, they had ended up right outside the Hammer and Ingot, with the smoky chimneys of Duldrus stretching out below them.

“Should be far enough,” said Imarathael.

“Now then. You were saying?”

“Cryptic message. I think we are just middlemen.”

“A familiar feeling. Well, go ahead.”

“’Not that silver thing,’’ Imarathael recited.

“I hope you know what it means.”

“I hope so, as well…” Jedd turned back to gaze upon the snow-capped spires rising above, and thought back to the old alliance, to Sir Halcrion, and Commander Gruodland, and an ancient order of paladins. “To a Knight of the Vale, it can hold a fair bit of meaning, indeed.”

“As long as whatever it was about hasn’t already happened.”

“Remind me, where did this message come from?”

“I am far too old and tired to care for the cryptic games. But that is how it is.”

“Well… if that will be all, I should be returning to my companions.”

“Yes. And I need my reagents.”

The two made their way back up the hill, with Jedd making sure to keep just enough distance. When they got back to the spot where they’d been before, another familiar face was awaiting him.

(Copied here from Discord because report was posted during a long forum outage.)