A devious trap was found by Friss, somewhere deep in the woods northeast of Mirith, on Day 46. Aforementioned trap was then sprung, by yours truly, because you know I simply cannot resist a well-made trap. But I am getting ahead of myself. The trap, I believe, was set by the Creed, judging by the roguish accoutrements strewn about the place, as well as the liches and wraiths and skeleton archers that the Creed has been known to employ. Unfortunately for the Creed, they trapped me, and not some mage. (As you may recall, only the mage’s skulls seem to be of any use to them).

I will attempt to paint a picture for you. Three wraiths and a lich, temporarily yet safely contained within a makeshift fort. Several skeleton archers and other lesser undead, patrolling outside the fort. Our daring team, advancing through the ranks of the lesser undead with ease, while the fearsome monstrosities on the inside just watched, waited, and taunted. And then the moment struck. I shall never underestimate the skeletal archers again.

I was standing outside the north wall of the fort; the archer was standing outside the east wall. I could swear it was smiling as it aimed its grappling hook at me, and fired. All of a sudden I was hurtling through the air, hopelessly unaware of what was up and what was down. The next thing I knew, I was lying inside the fort, inside what appeared to be an open box… or an open coffin. A maniacal laughter resounded all about, and a massive fireball began to consume my flesh. The last thing I remember hearing was the coffin slamming shut. 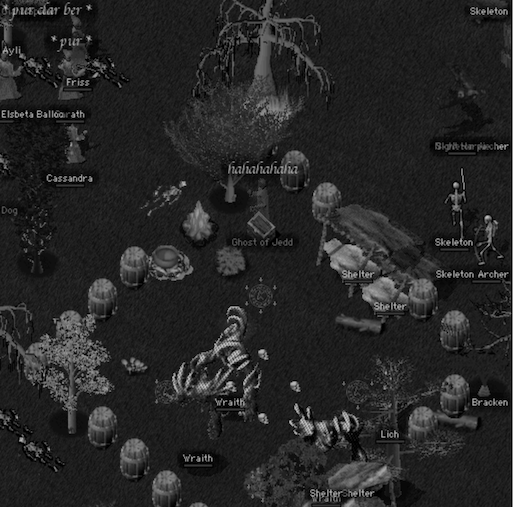 From what details I was able to gather later, two other casualties soon occurred. The fort was opened for a brief moment, and the lich unleashed its Chaos Field on the two unfortunate souls who had gotten too close. Elsbeta Balloc, and Friss’s Night Harpie. Both were obliterated in an instant. But eventually, our reinforcements arrived, and thus the real fight began. It was Garath, I believe, who kindly returned me to the world of color and patched me back up to full health.

While the others engaged in their epic battle with the lich, I moseyed off to go look for my body. But just my luck – it was still locked inside that flaming coffin! I spent quite a few minutes fiddling with the lock, and when I finally got it open, it exploded with a force that I have seen only two or three times before. I had been strong enough to survive the blast, but just barely. “Phew”, I said, relieved at having cheated death for once. It is of course at this point in my tale, that a lone, curious skeleton found its way to the scene of my little tragicomedy. 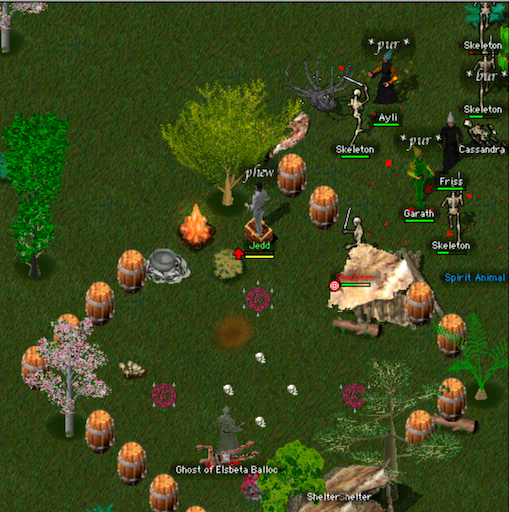 It poked at me once with its unholy blade, and I tumbled right back into my coffin, gray once more. The rest of the night is a blur. Eventually, somehow, our team prevailed. Rather exhausted from the ordeal, I returned home as fast as I could manage, with a brief rest stop at the Sect of the Crystal. And that’s about all I can remember.