Jedd
August 2020 in Role Playing
As the chilly afternoon sun begins to sink, Jedd and Annabel approach the Ferrite Lounge. A low murmur of voices can be heard from within. Jedd strolls through the doors with measured indifference, eager to get out of the cold, while Annabel orders Fiona to wait outdoors. Despite initial protests, the curious little beast eventually manages to find a spot by an outdoor firepit, and settles in, no doubt in sore need of rest from all of the day’s excitement of lizards and harpies. Annabel follows Jedd into the lounge. The aromas of briny trout, fresh roasted gaper, and mulled ale await them inside. Jedd scans the crowd - nobody seems to notice the newcomers. He and Annabel pull up a seat at the bar, away from the center of the room. Klevin sets down two frothy mugs on the end of the bar and slides them down. Jedd tosses him a coin in return, and the two sip in silence while the others in the lounge chat amongst themselves.

(Jedd): Some weather we're having.
(Annabel): *taps fingernails on bar*
(Jedd): * whispers to Anna * This Fergus must be something…

Evidently, Jedd was not quiet enough, as Klevin is able to overhear from the other side of the bar.

(Klevin): He's always talking with the other miners in here. Quite the man about town.
(Annabel): Oh? Hmm. Maybe we should ask around. 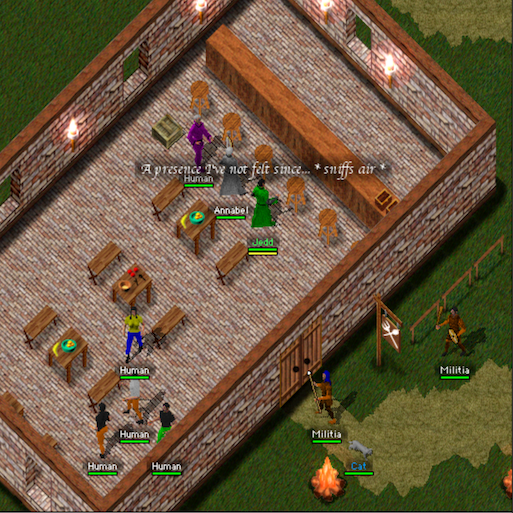 At this, two strangers burst into the room, both of them armed and garbed in leather. The whole room falls dead silent as they enter. Jedd resists the urge to reach for his weapon, but watches with heightened alarm as the two soldiers march into the room and post guard at either side of the door. Then a third man follows close behind, an older and more grizzled, gaunt-faced fighter by the looks of him, with one hand locked on his sheathed katana. The man wears a striking pale blue garment. Could this be Fergus?

Annabel clears her throat, and Jedd opens his mouth to greet them in a deliberately passionless tone.

Then, the older man speaks. “Hello”.

The sound of his grave, hollow voice is almost enough to send Jedd reeling. No… the fighter thinks to himself. It can’t be.

Just then, a fourth man enters the room, a man with peppered hair and weary eyes and leathery hands. “‘ello everyone,” the new arrival says, in a tone that sounds almost cheerful by comparison. Maybe this man was Fergus? But then who was the other?

Fighting off the turbulent swirls of emotions, Jedd finally manages the decency to rise to his feet. “Greetings,” he spits out, keeping both eyes locked on the third man, the man in blue.

The man in blue ignores this, and instead turns to his three companions. “Are these…” he says in his frosty tone, “the Hidden Vale?”

“That green robe,” says the man in blue, who grips his weapon so tight that his knuckles have begun to turn white.

Jedd instinctively places his hand on his hilt. “Good day to you. I am Sir Jedd of the Vale, and this is Mistress Annabel. I take it you must be…”

The fourth man then interrupts, turning to the the man in blue. “Is everything okay, Razan?” he says.

Klevin then cuts in, no doubt hoping to break the tension. “I’m glad he kept the place running, and worked so hard for the Rebuild Duldrus movement. His recipes really helped business.”

“Yes, but he died.” Jedd nods at the man in blue. “Funny that you share his name.”

The man in blue does not stand down. “I remember burying my sword into a man clad in green.”

“How curious,” says Jedd. “You do sort of resemble him, I must say. But the Razan I knew died fifteen years ago. Victim of the Ice War.”

“Hmm... I do not… recall many memories of that.” The man in blue takes his hand off his weapon at last, and instead begins to scratch his head. Annabel laughs nervously, and the room seems to breathe a collective sigh of relief.

The fourth man - Fergus, evidently - turns to the two soldiers at the entrance. “Watch the doors outside,” he barks. They do as they are told.

“Yes, that be my name. Fergus Black. And the lady be?”

“Annabel, nice to meet you.”

The fellow named Razan clears his throat. “Let’s get on with this,” he says, staring at Jedd with eyes narrowed.

“We were very eager to hear about your proposal, Mr... Fergus,” says Jedd. “But please, go on.”

“As ye know, lizards attacked recently. For what purpose, we don't know. We don't have men to protect, and the chance of Mirith helping…” The man trailed off.

Jedd nods. He had been giving this subject a great deal of thought in the last year, of course. He thought of his former allies in the Mirith Vanguard, and the trials and tribulations they all endured together. He was actually quite certain in his opinion that the Mirith of today would in fact help out, if asked, even with Mirith’s resources spread so thin as they were at present. But he also recognized that the Duke of Duldrus, Lord Rengal, could be fairly criticized for being derelict of duty. And he definitely recognized that the King of Mirith could be fairly criticized for lots, lots more. The Royal City appeared to be going through something of a crisis, and Jedd was well aware that it was often better to wait patiently on the sidelines and let such developments play themselves out, and then strike only when the moment was right. Naturally, the Vale already had several Eyes trained on the “developments” to the south, watching every last movement in the shifting currents in the sea of public opinion. It was safe to say that the perfect moment had not yet arrived… though it was doubtlessly approaching. All the same, Jedd realized it would be quite prudent to hold his tongue on these nuances, for the time being, and let the man continue.

“However,” says Fergus, “We 'ave been saving up ores and weapons.”

“For what purpose?” says Annabel.

“We would like to send a caravan with these, to Marali, Andris, other towns… to sell the fine Duldrus ores and weapons. With the money, we will try to build up the town a bit more. Some protection.”

Jedd scratches his chin. “Most intriguing…”

“Of course,” says Fergus, “it best be that Mirith doesn't learn of this too soon.”

Jedd thinks back to his conversations at the Hammer and Ingot. “Well,” he says, “Wilem has told me of how many Duldrus weapons already go to Mirith, aye…”

“Yes.” Fergus closes his hand into a fist. “They bleed us dry.”

“Mirith only takes,” says Razan. “Gives nothing in return.” 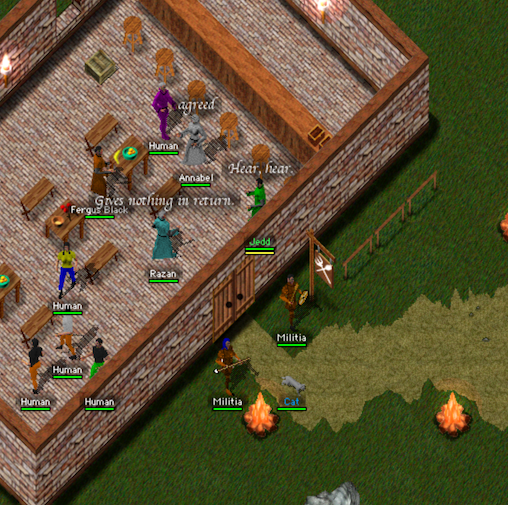 Fergus breathes a heavy sigh. “We would need ye all to protect the caravan.”

Jedd exchanges a quick glance with Annabel, who nods back at him in return. Jedd turns back to Fergus. “Our decisions must be made together, as one body,” he says. “But I can perhaps risk saying it is highly likely we would be in support of this.”

“Of course,” says Fergus. “Ye don’t have te decide now. Perhaps this joint venture can strengthen both Duldrus and the Hidden Vale. Ye would be great allies.”

“The other side of the mountains is a critical strategic point. We served this town well during the dark times, during the wars, and we would surely not pass up the opportunity again.”

“Yes,” says Annabel. “Anything for the betterment of Duldrus.”

“Well,” says Annabel, “We’ll get back with you as soon as we have a final decision.”

“That would be amazing. Perhaps next time, I will invite ye over for dinner with me and me wife, Molly.”

“Thanks for including us, Fergus,” says Annabel.

“Now that would be lovely.” Jedd smiles. “If timing does not work, we can always leave a note with Wilem, or Klevin?”

Fergus then regards them all one by one. “And thank ye too, Miss Annabel. Sir Jedd. And Razan of course.”

Jedd winces at the sound of the name, but forces his thoughts aside. “It has been a pleasure.” He then turns to the man in blue. “A pleasure to meet you, as well… Mr… Razan.”

“Yes…” Annabel makes for the door. “We’ll head on back to the Vale. Have a good day!”

“Quite right.” Jedd takes one last sip of his ale and wraps some furs around his shoulders. “You shall hear from us before long.”

“See you soon,” says the man in blue.

“Fare…farewell,” says Jedd, as he follows Annabel out the door, and exchanges a silent nod with the militia posted at the doorway. Annabel calls for Fiona, who takes her sweet time in stretching out, before climbing back up on the ranger’s shoulders. The trio then sets out on the short road back home, with the sun setting behind them.

Suddenly, Annabel screams in excitement, causing Jedd to crack up.

(Annabel): it was really hard to act all cool.
(Jedd): Oh, believe me, I know!
(Annabel): ^^
(Jedd): This Fergus Black seems to be the way to go.
(Annabel): I’m glad others are thinking of improving Duldrus as well.
(Jedd): We'll need to find Peku, Luroth, Snowons...
(Annabel): Yes.
(Jedd): Someone should write to Sully as well.
(Annabel): Of course.
(Jedd): I suppose I can do that part.

Lost in conversation, they soon reach their hall, and take their seats at the grand table.

They exchange farewells. Jedd stands up slowly, and moves to the crate of ferrite he had left at the foot of the table. He heaves it back over his shoulder and sets off in the direction of the mines. Removing his dwarven mining axe, he clears his mind, and begins to hack away at the stone, stone after stone after stone. As he chips away at the rock, he begins to reflect on how far things have come in his long time here. A younger him would’ve been unbelievably proud of where he now stood, closer to achieving his plans and goals than ever before. And he was, in his own way, still filled with the abundant, verdurous feelings of pride and joy and satisfaction. Yet he could not deny the overwhelming sense of nostalgia and melancholy creeping in just beneath the surface. He had gone over this day many times in his head, thought out its possible outcomes night after night. But never once in that time had he ever expected to find the blue in the green.