A Tale of Three Witches

Jedd
March 6 edited March 6 in Real Time Quests (IC)
We are under attack. Return here at once.
-- 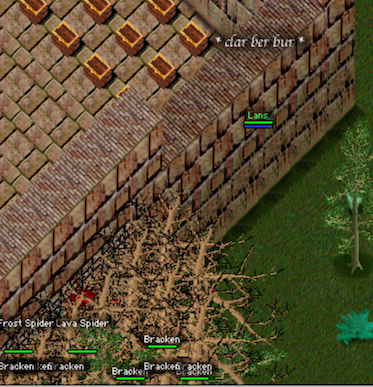 The desperate call for help arrived in Mirith on the wings of a bat, under the cover of darkest night. It would reach Ryen first.

The wizard took off running – no time to waste looking around for backup; backup would find him. Besides, the path to the Vale was one of the quietest paths on the whole continent, and so well worn that you couldn’t get lost if you tried. So it wasn’t the biggest surprise in the world when he ran into another person on that same path, heading in the opposite direction with a bottle of whiskey in hand.

“Oh, hi!” she said, before making a familiar croaking sound.

“Me?! Me looks for pretty pretty flowery flowers.”

“I just thought, for a moment... nevermind.” The wizard cleared his throat. “Flowers you say?”

“Aye. That other forest witch… I must find what she used.”

“Oh, wow,” said Ryen. Frog in the throat… peculiar accent… bottle of whiskey… of course! This person was none other than the elusive forest witch Istra Falvo. It had been a fair few moons since Istra had been seen around the Vale. It was good to see that she was still in one piece. “So,” Ryen said. “What kind of flower do you think it was? A nevia? Maybe a bracken root?”

“I smell something rotteny-rot. Like… a droopy flower.” She took a long swig from her bottle. "Did you see her rituals?! All black and sleepy?”

Ryen gasped. “S…” he said, wracking his brain. That other forest witch, who had been behind a dark, bloody ritual under the full Sleeping Moon. What was her name? “Supper?”

“Aye, she’s called Dinner, or something. I was proper impressed.”

“Maybe it was a drink, not a flower.” She took another swig. “But man, she did use something proper strange.”

“Hm," said Ryen. "Maybe the flower was used in a drink. But I’m not the best alchemist, I’ll admit.”

“She had a hot cauldron. But it was no soupy-soup.”

“Right. Well, let us know if you need any help with that flower. I’ll keep an eye out, for sure.”

“Will do! I’ll keep searching!” She tossed a bottle toward Ryen, who barely managed to catch it. "There!"

"Cheers!" said Ryen. "And oh, before you head out. Keep an eye out for anyone sneaking around with bracken seeds. I just received word from the Vale that there was an attack."

"Oh, like mine?" She hoisted a bag of seeds in the air.

"Not me, then. Jeddy-boy is proper friend."

"Heh. He'd probably think you meant it as a gift, if you did."

"You want boom? There!" Istra plucked a seed from the bag and flicked it toward Ryen.

"Anytime." She returned the bag of seeds to her pack. "I did see someone."

"There was an ugly fellow-man. In red. Bleurgh. He had a bag." She paused and let out a loud croak. "And he mocked my pipe. Proper pipe this one!"

"Lovely. Did you hit him, or something?"

"He's ash now." Istra took another swig. "Anyway, green boy, there can only be one forest witch!"

"I agree! There's no place for Supper in this world."

"None! Only liquid Supper! I'll turn her into soup!"

"Sounds good! Good luck with the flowers then." Intrigued by the possibility that Istra had already killed the Vale's assailant, Ryen took off northward with renewed energy. The dark forests seemed to glow under the light of the brilliant sea of stars above. Such was its beauty that for a moment, he almost forgot the urgency of his mission. Until, of course, he drew near to the Vale, where he found a very dense cluster of bracken completely surrounding the gate. Standing a safe distance away, he began to set fire to their roots and branches, watching impatiently as the wood crackled and sputtered. Not long into this process, he noticed a flurry of movement out of the corner of his eye, to the west. He spun around, spells at the ready, only to find a simple bat, flapping about aimlessly.

"What are you doing here?!" Ryen said, before sighing heavily. "Well come on then." He gestured the bat over, and remarkably, it obeyed. He gave it a gentle pat. "That's better! Now stay here and keep quiet!" Ryen turned back to the trees. "This calls for a professional, little one." 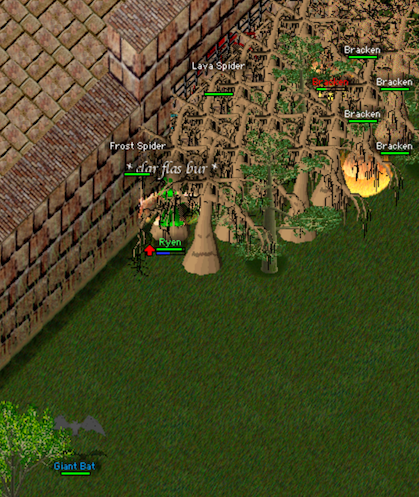 After about an hour of controlled burning, and a few close calls, the gate was finally clear again. Ryen strolled into the hall triumphantly, his new friend close behind him. Oddly enough, Lans was nowhere to be found. The wizard contented himself with the thought that he must've been hiding in the basement, and then turned his attention back to the matter at hand.

"Okay!" the wizard said. "Welcome to our home, little bat. First rule, no hoarding! You will share you food with all the other bats." He tossed the bat a piece of raw steak, which it devoured in moments. "Now then... just where did you come from?"

He began to pace the central hall. That old scrap of paper was still lying atop the table. You are being too nosy. Mind your own business. With a wave of his hand and a * clar flas bur *, Ryen reduced the paper to ashes. "Dumb note." He spun back to his friend. "Alright then, chop chop!"

The pair marched out of the hall and started off westward. They didn't even make it to the road before encountering a lady all in gray.

"It must be you!" the lady said, her voice calm and soothing. "Sweet thing. My dreams told me of a witch."

Ryen sent a bolt of lightning flying toward a harpie that had wandered in. His bat friend went chasing after at it. "Dreams..." he said. "Keeping you up at night?" She smiled. "I was looking for you, sweetest one. My dreams told me of a witch looking for Sleep. Is it you, who seeks the power of Sopor?" At this, Ryen could almost swear that her eyes were beginning to glow red.

"Deliver yourself to the delights of sleep. You were the one seeking me."

"Dreams can be deceiving."

Her gaze seemed to intensify. "That, they are not! My dreams showed me clearly: a witch in the forest... longing for Sopor. Wanting her power."

"Yes? It is you, sweetest of sweetests?"

"I uh, I guess you found me!" Ryen stood up straight. "What power do you have to give?"

"Alas, the moon is not right. I must recharge my power with the moon."

Ryen glanced up at the night sky. "Sleeping Moon, it is not."

"Wait a full cycle, and the final sleep will embrace you."

Her eyes flashed red again, and suddenly Ryen was paralyzed, his gaze still fixed on the heavens. With every ounce of force he could muster, he willed his arm to move, but it would not. He started to feel the lifeforce drain from his body. The cloudy night sky was growing cloudier, grayer, colder...

"The sweetness of stillness," the witch whispered.

Istra... he thought, as the clouds gathered around him. You owe me one...


As he thought this, he began to feel a tingling sensation in his gut. What was that? It began to grow, grow stronger, heavier. Was that... anger? Yes, raw anger. Rage, even. Every ounce of him was burning. He felt like he was about ready to explode. He managed to let out a fierce roar, and suddenly, the invisible forces locking him into place dissipated. Pure, unadulterated fury exploded in every direction, setting the brush alight, and sending a massive fireball hurtling toward the crazy witch.

Not waiting to see the damages, he spun around and made a break for it. Above the roar of the flames, he could hear her voice call out after him, that impossibly calm voice. "You cannot kill... what is already dead!"

He ran and he ran, until the walls of the Vale came into view, and the witch was far, far behind him. As he made his final sprint toward the gate, something snagged on his legs and he tumbled headfirst into a log. Massaging his aching skull, he picked himself up and peered over his shoulder to see what he'd tripped on. The hollow eyes of a charred corpse stared back at him.

"ARRRGH!" He scrambled to his feet and dashed toward the gates. Disembodied laughter echoed throughout the woods behind him. An all-too-familiar voice, sickly sweet, called out faintly after him. "I will be back for you, sweetest of sweets! Give me a full cycle!"

And then, as he stepped into the hall, the laughter and the voices suddenly stopped. All was quiet, save for the spiders' usual chirping. In silence he crept over to the dormitories, through the creaky door, and over to his bed. Gently, he laid himself down on the bed, and stared at the ceiling with eyes wide open. Sleep would not be coming tonight.