A daring adventure in the Atoll today ended with the taste of bitter disappointment. Our impromptu trio did very well, actually (Amere, nanasisan, and I). We uncovered new ground, discovered new sights… the only problem was that I still don’t really know how to absorb a lightning bolt like I’m supposed to. Yes, yes, I know. Bad news for me, but at least the other two were able to leave unscathed. We’ll have to convince Ryen to teach me some of his tricks. As you know, I spend most of my waking hours at the desk (and even some of my sleeping hours, too). This does not pair well with times of war and strife. Who knows when I will have to put down my pen and pick up my staff again? The next time it happens, I will not be so unprepared!

On to the details. The trip began as Amere and I decided to scout the island for any clues that might reveal more about The Creed and their recent activities around Mirith’s cemetery. Amere was still livid over the (accidental?) attempt on his life, and perhaps even more eager to scout than I was. We left no stone unturned, and at first, found nothing amiss. But then, as we neared the temple (which was still surrounded by those roots, by the way), we ran headlong into a wraith, and my heart just about stopped. The skirmish was bloody and dicey, so I will gloss over it for now, but know that we did eventually come out on top.

Then, as luck would have it, we ran into nanasisan on one of his daily patrols. Emboldened by the fortuitous meeting, we descended into the Atoll volcano and traversed the upper levels. It was far from easy, but as I related above, we were managing just fine. 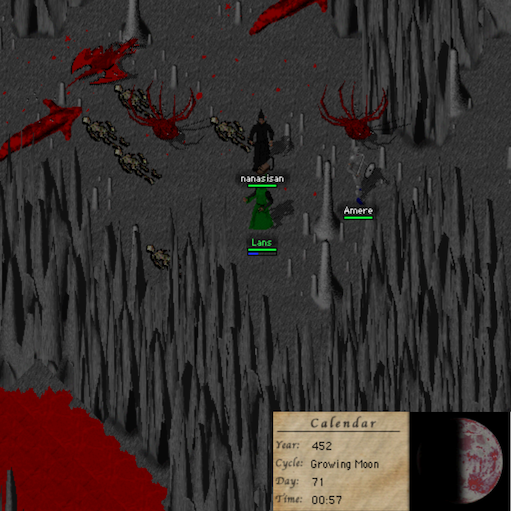 To the south, we came across the narrow passageway that has been recorded in previous ventures, many moons ago – but we had already made the very reasonable decision to leave it behind, knowing full well that this passage was leads to a place from which there is no easy return. 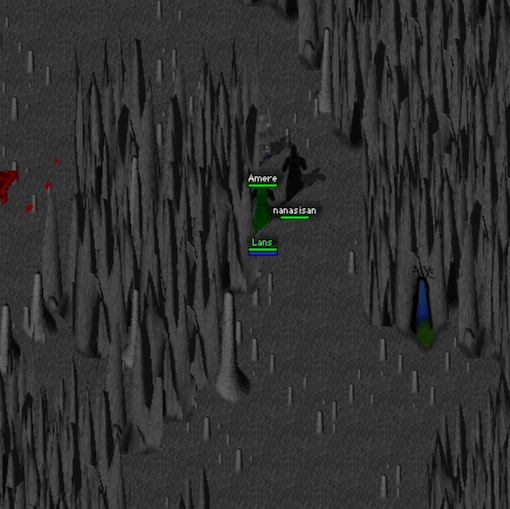 Instead, we decided to explore northwards. Not too far in that direction, Amere spotted a chest, and our hopes of finding some clue, anything, grew exponentially. But we were to have no such luck, as in that very moment, a fierce wave of volcanic creatures emerged from around the corner. It was one of the toughest fights I’ve had to heal, but we made it through. Until of course the very end, when to my great shame, I let slip my protective magic shell, and was incinerated into the gray by a single bolt from the last surviving bone mage. The others beat a safe retreat, while my spirit found its way to the island temple.

To have come so close, only to fall before the finish line… let us speak no more of it. I have taken my lesson to heart, and as I said before: next time, those volcanic denizens and Creed rogues won’t be so lucky.

P.S.: I write here as I forgot to add earlier: I have to hand it to Ryen, who was also present at the island, where he nobly sacrificed himself to the horrendous wraith so that Amere could slay the darned thing. After all was said and done, he resurrected at the temple, but he couldn’t shake off the wraith-induced disorientation, and he was so weak that you could have knocked him down with a feather. We did not resume the mission until getting him to safety, and I am pleased to report that he has made a full recovery and is now back in the Vale, sleeping soundly.

P.P.S.: I have also just received word from Amere, who heard it from nanasisan, that the esteemed Zaji was also attacked by a rogue. The rogue did not survive the encounter, which is good, but my worries grow by the hour. Stay safe.
Sign In or Register to comment.