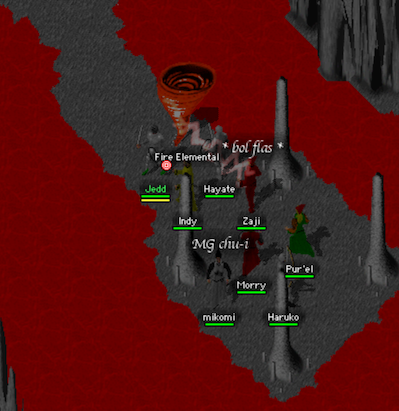 I pray this letter finds you well – I can only imagine how the fine linens and furs of the Vale have been treating you. Ever since we broke camp in Foehan, I have been quite enjoying my stay at the inn here in the royal city. Though the beds leave much to be desired, anything beats those wretched tents outside that wretched Voidgate. But of course I have not written you just to dwell on the horrific things we found in that otherworldly realm, rather, I mean to provide a quick briefing, and a number of sketches, on a concerning sequence of events that just transpired just a few days ago, on the 182nd Day of the Waking Moon, Year 452. The conniving wizards of the Division of Diabolical Devices appear to be on the move again, with a great number of brigands amassing in and around the Tree Maze. But I’m getting ahead of myself - let’s start at the beginning. 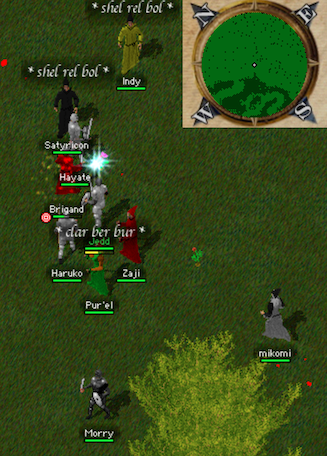 Upon waking from my peaceful slumber, I came to the bank to find a group of hunters gathering to investigate the scout reports of smoke and rumbling around the Tree Maze. Just outside the entrance, we encountered two red-robed brigands, and found some footprints suggesting that they had come from the north. We followed those prints a ways, but not finding anything out of the ordinary, decided to venture into the heart of the maze itself. There too, we did not find anything amiss, not even in the den of the forest dragons that lies beneath the central ruins. We determined that we must have gone astray when investigating the footprints on the surface, and thus turned back that way. Sure enough, we eventually discovered a hidden camp of brigands – wearing the same red robes – as well as a wall of bracken and a number of Sand Golems. 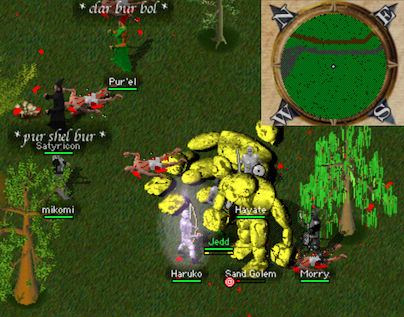 It was then that I first started to suspect we were dealing with the Division of Diabolical Devices again, as the taming of Sand Golems was one of the many feats that they accomplished during their heyday in the 430s. The Artificer who pioneered this tactic, as you may recall, was the same one who had captured Amere and I many years ago (we would have been tortured, too, had the rescue not succeeded). Needless to say, the sight of Sand Golems has always been a disturbing one for me ever since. And of course, the results of those experiments still exist to this day, at the very bottom of the MariRangers ruins. Anyways, after clearing the camp, we discovered some correspondence that confirmed my suspicions. The papers read:

“Master Rem’s called an emergency meeting. Something’s up with Fiadoryx. Prepare for the MR lower levels immediately. And careful with Lord Viri, he looks furious.”

The mention of Fiadoryx was most intriguing, given our recent encounter with him in Foehan, as reported by Lillium. Still, I couldn’t help but laugh at our predicament as we turned on our heels and set back toward the MR. That journey was, thankfully, much quicker and smoother than the first. But of course, upon reaching the level beneath the forest dragons, we encountered a great number of brigands. 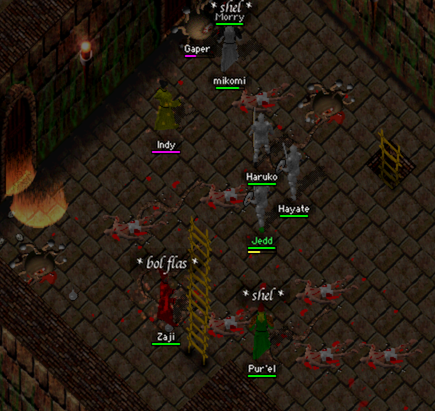 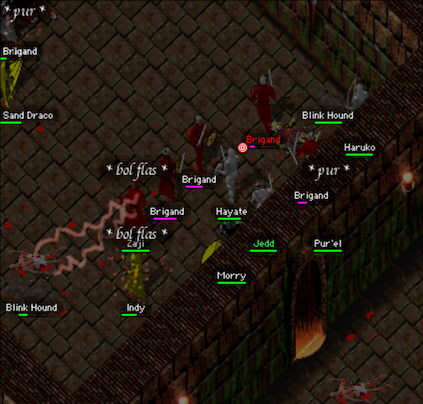 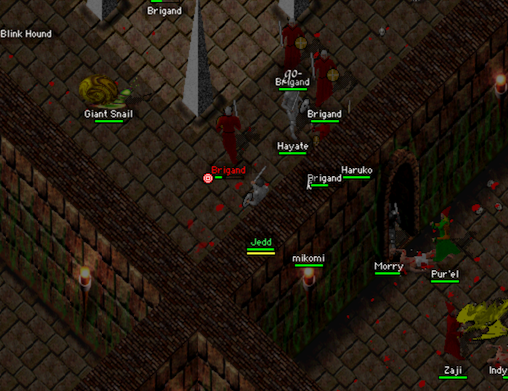 We fought them all the way to the Diamond Portal - the one that leads, eventually, to the Hell Mage Lab and the home of the dastardly mage J.J., the creator of the Hell Mages and Magma Golems. Just before the portal we found another set of notes. These ones read:

“JJ’s people will be expecting you for the transaction. I’ll handle the funds. With the recent windfall, we should be receiving many more HMs this time.” Naturally, I was quite alarmed by this. It would seem that the D.D.D. was looking to expand their arsenal with another purchase from J.J. (And we both know what happened the last time such a purchase transpired - Magma Golems serving as bodyguards for that appalling Dwarf operation in Duldrus.) Anyways, as you might expect, we thought it would be a good idea to keep investigating through the Diamond Portal, and hopefully, J.J.’s lab. But before doing that, we agreed to take a quick look at the next level down in the MR, to the place where the sand dragons lurk.

No sooner had we reached the third level than we were beset by another squadron of brigands. We defeated them with little difficulty, but ran into something else. A wall of arcane runes, barring all entry. Before it, another note - instructions for the brigands: “Only artificers and approved personnel beyond this point. Rem’s orders.” This must have been the “emergency meeting” that we had learned about on the surface. As for the meeting’s purpose – “something’s up with Fiadoryx” – I can only begin to guess. Perhaps after some further reflection, and sleep, of which I am sorely lacking, the pieces will begin to make more sense. 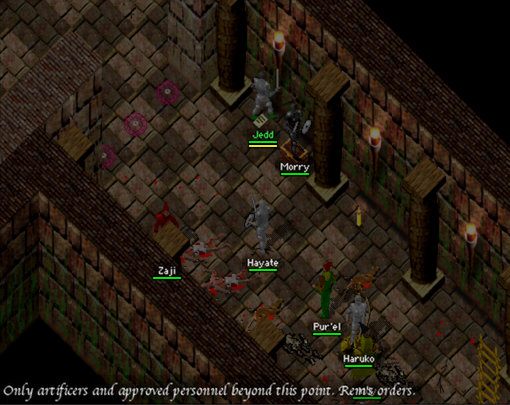 Now then: not having any other direction to go, we doubled back to the Diamond Portal, which was probably for the best anyhow, as I’m sure it wouldn’t have been a pretty sight had Rem and his Lord Enchanters and Artificers discovered our little infiltration. 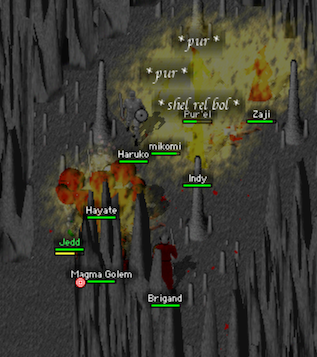 We found a few more red-robed brigands on the other side, in that curious cavern of portals, but that ended up being the last of their number. I cannot tell if this means that we interrupted their HM transaction – I assume we did, but it probably won’t take them long before they figure out what happened and try again. After all, none of the brigands had any significant sum of gold, to my knowledge, and the notes suggested that the “funds” were being taken care of behind the scenes. This I can perfectly understand, given how easy it was for us to sneak in there and lay waste to their rank-and-file soldiers.

So we traversed the cavern of portals, and descended into the ominous Black Crystal portal, which as expected brought us to the outskirts of the Hell Mage Laboratory, those ancient walls of a place once called Haven. 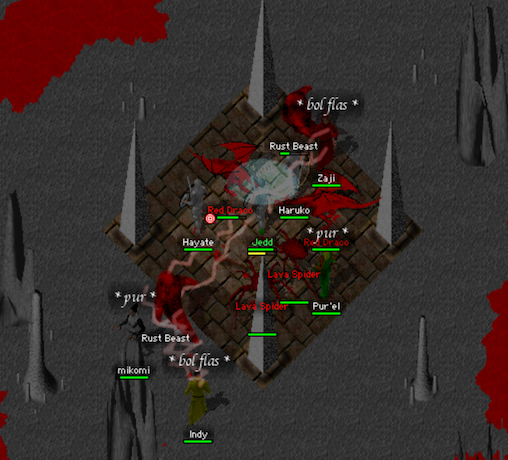 Our progress through the area was slow, and steady, but no less successful than our previous maneuvers. 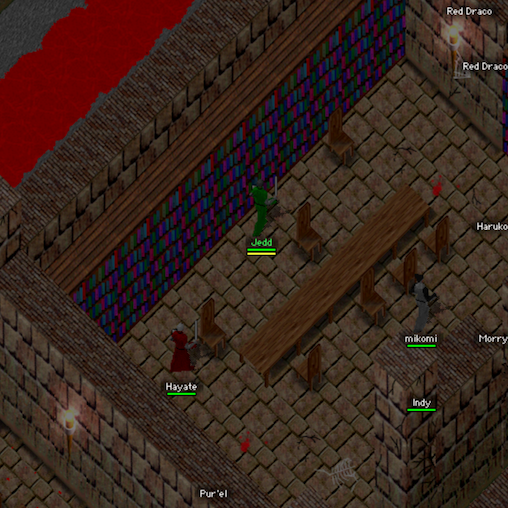 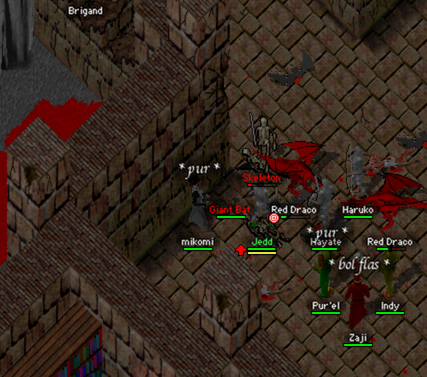 About halfway through the laboratory, amid the hellfire of the mages and golems, we started to encounter more brigands. These wore the normal armor, no robes of any kind. At their camp, we discovered quite a bit of loot, and scattered beside the shelters were their own orders. They read as follows:

“We’ve sealed off a portion of the volcano to house our Creed allies. You should also expect a visit from Rem’s people, for their next purchase. Any more intruders, kill immediately. JJ hates to be interrupted. -Sgt Orik” 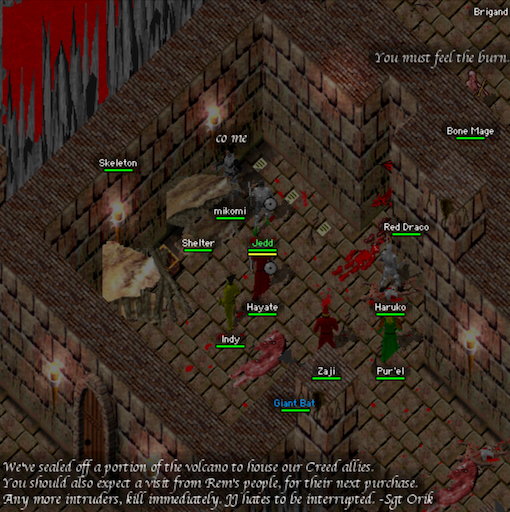 Well, J.J. got his wish, as we decided – what with the most dangerous, fieriest portions of the laboratory still ahead of us – to call it a day on our reconnaissance operation and take the long, long road back to the surface while we were still in one piece. 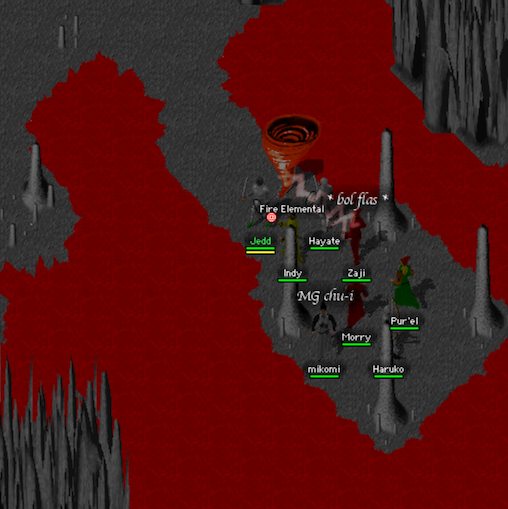 By the time we saw the sun, it was Day 184. Naturally, we were all quite exhausted after the two-day ordeal, and thus I headed back here to Mirith and went promptly to sleep.