Jedd
February 18 edited February 19 in Real Time Quests (IC)
Shadows cast by candlelight danced softly against the warm stone walls of the study, while the smell of ginseng smoke wafted in from the corridor. At the desk sat a wizard in black, and a fighter in green. Piles of papers and tattered volumes lay scattered before them - the organized chaos of the archives of Mirith. The better part of a day has just been spent poring over old records and annotated reports, in a vain attempt to uncover more on the secretive nature and origins of A.R.D.E.N.T., that vexing organization of enchanters and tinkerers. Surely, he had thought, there had been some breadcrumbs left behind, forgotten by history, which would light the way like a beacon of truth. But the way forward was a mystery, cloaked in shadow, like the very Void itself. At the thought of it, a sudden chill went down his spine.

The wizard in black cleared his throat. “I wonder if Fiadoryx could be an associate of Dalton’s? Trying to foil Edgard’s plans for whatever disagreement they fought about."

Fiadoryx... a name unfamiliar to the fighter until yesterday, the day of their most recent, unnerving expedition into the Void. Kwoo seemed to recognize it; he made a mental note to ask him about that later. The fighter would need to thank them all as well, for making the expedition at all possible. He went down his mental checklist: Kwoo. Lillium. Nial. Zaji. Iceane. Alidar. Danery. Cavan. Malthaen.

"Of course there is not proof of this," Malthaen went on. "But Dalton has seemingly made previous attacks on some laboratories of Edgard’s.” The wizard unearthed the next page from the archives, unleashing a thick cloud of dust into the air, and pointed to the section titled “Bounty Hunting”.

Old, forgotten names. The fighter scooted in closer. One of those attacks, he had been fortunate enough to witness himself, while he and Siegal were out on patrol. The perpetrator… “Dalton. I’ve always wondered about him.” The fighter peered at the worn parchment. Though he barely recognized the words, the slow and careful handwriting was unmistakeable. He began to read aloud. “Edgard set up a sort of bounty hunting operation, paying adventurers to bring back loot from rare and dangerous creatures. Ever the businessman, he started to use the rune system to pass along bounties and missions from third parties who had heard of his services… though there was no way to confirm their identity. At any rate, the authorities in Mirith were unconcerned with the whole affair, and Edgard’s business continued to grow.” He skipped ahead a few lines. “But all the while, Edgard continued to be harassed by the men in red and black. One of their number appeared during a bounty mission under the Waking Moon of 440, and implored the hunters to keep the creature samples to themselves, but it was in vain. Edgard was informed of the subterfuge, and he promptly began to investigate. Later that moon, A.R.D.E.N.T. Laboratory #02 was attacked by mercenaries under the employ of a certain ‘D’.” The fighter stood up and moved to the window. “Thank you for bringing up Dalton. I’d all but forgotten about him.”

“The men in red and black…they urged us hunters to keep the creature samples to ourselves, throw them into the sea, do anything but give them to A.R.D.E.N.T. Those bounty hunts, maybe you remember them, they were always just so… suspicious. And they paid so well. But those men in red and black… what if they were just trying to help us all along?”

“Whoa.” Malthaen scratched his chin. “Then what was the whole purpose of opening the void, then? Surely not just research as those in A.R.D.E.N.T. led us to believe.”

“That’s the big question now, isn’t it…” the fighter paused, thinking back to the notes Nial had read, while the din of battle raged around him. What had they said again? He compelled himself to remember, to access those scattered, mixed-up memories he would have simply rather forgotten. 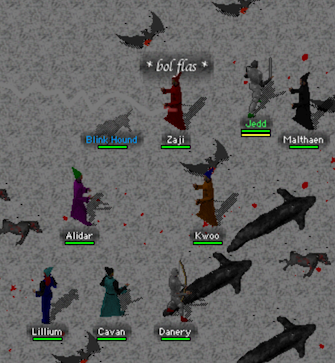 After untold hours of madness and disorientation, all at once the fighting came to a halt. Beyond the heaping piles of skeletons, bloody blink hound furs, and heaps of dark, acidic goo… there laid the terrifying, scaly body of a black dragon, and just in front of it, another set of human bones, this one still covered in robes of red. They drew closer. A single word could be seen adorning the robe, in fine golden embroidery: “Fefe”. 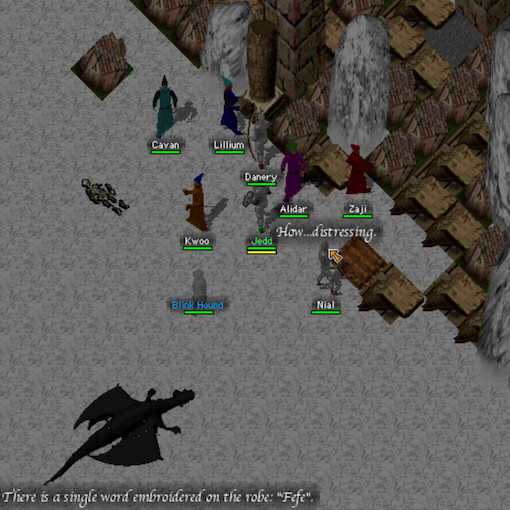 The fighter reeled back.

Jedd removed his helmet and crouched down to get a better look at the skeleton, while the wizards worked to light a fire. “A lesser agent of A.R.D.E.N.T,” he said. “The records should show that he was present at the very first opening of the Voidgate. I think. And there he fades…”

“How… distressing,” said Nial. “To have been present when the Void opened, but to have been… absorbed thus. I do not trust A.R.D.E.N.T. at all, but I do not think their agents deserve such a fate.”

Kwoo then spoke. “What do you think killed the dragon, Jedd?”

The fighter stood back up, and turned around. He had almost forgotten about the dragon. Was it Fefe, as unlikely as that seemed? Something else entirely, some darker force at work? When had this even happened? He was starting to feel dizzy. Very weakly, he managed to speak. “I hesitate to conjecture.”

A grim silence fell upon the scene, and the clerics began to mix their potions. As they worked furiously, scattered words of an old A.R.D.E.N.T. prophecy came to him.

That silly line, the one that never made any sense… well, none if it really made sense now that he thought about it… how did it all go again?

The fighter shook his head. Countless days he had spent mulling over those words, innumerable attempts to uncover that which was simply unknowable. What business did A.R.D.E.N.T. have telling people to “fear not”, anyways? In the end, Nial was right: they were not to be trusted.

“So where do we go from here?” asked Malthaen.

“Jedd was proposing a northward course,” said Nial. “Into the realm of Hell Mages, unfortunately, it sounded like.”

“This place is so disorienting,” said Lillium. “I can’t remember if it was north or south.”

“Ahh, we would loop around the rock formation to the west first, Kwoo.”

Jedd nodded. “I do remember, vaguely, the other structures to the north.” If it hadn’t shifted, that is, as Lillium had suspected. The longer they wandered in these hopeless, shadowy depths, the less he felt sure about it - sense of direction, conception of time, anything. 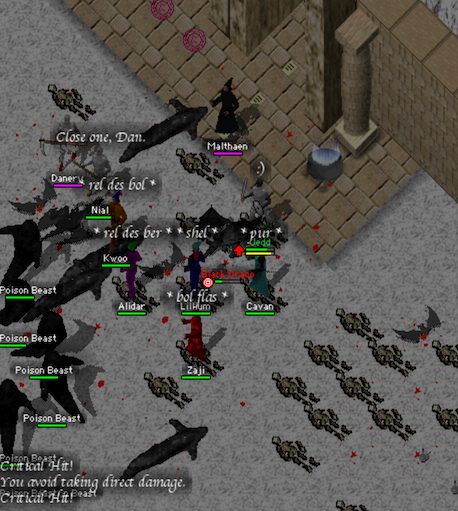 A bloody scream from the frontlines. Another body fallen to the vicious bites of the dracos and the serpents. Armies of skeletons, climbing out of the frozen ground. And above it all, a single Hell Mage paced menacingly, watching silently from its perch behind a barrier of magical runes – its prison, or its home? – never losing its hateful, knowing stare. At its feet lay a book, safely guarded by the runes. Outside the runes, however, a set of notes could be seen quite clearly.

“We are trapped,” Nial began to read from the tattered notes, while the chaos unfolded around them. “Fefe got separated from us when the void dragons attacked.”

The fighter danced about in a flash of steel, battered and worn, against wicked teeth and pitch-black scales.

“They have us surrounded now.”

A voice cried out to push to the east. Lightning bolt after lightning bolt blasted through the dark, gray world, each time illuminating the horde of shadows drawing ever closer.

The fighter took a step back as a fireball flew past his shoulder. The dracos were closing in, emerging from the shadowy depths as quickly as they were being felled.

“If any of my fellow A.R.D.E.N.T. agents survive… then recover the diagram, and finish what we started.”

A cry for retreat went up from the frontline. Poison beasts and blink hounds as far as the eye could see, fast overrunning their position. They needed to move. Now.

“Finish what we started… finish the Harvesting of Oberin. -E.”