Reports from a Tent in Foehan

Jedd
January 2020 in Real Time Quests (IC)
A stack of papers bound neatly with twine can be seen lying besides a bed of furs in an otherwise messy and disorganized tent. At the top of each page there is a date and a brief heading, written in a hasty, somewhat illegible script. Beneath each heading, a different hand has written a response, with a considerably greater degree of care.

Initial defense raised by the rogue Rieven and young Ruxem. Per Ruxem’s briefing, they handled the black dracos and poison beasts with relative ease, but upon meeting a wraith, they were forced to retreat. After ensuring the Foehan campground was secured, they used their orbs and found that nanasisan was not too far away. They pursued him all the way to Duldrus, which brings me to the next entry.

When Ruxem and Rieven finally found nanasisan, the wizard was battling brigands and gapers at the base of the winding mountain path that leads to the western slopes of the Hidden Peak (the same slopes where the dwarves remain imprisoned, mining away day and night). The three of them, joined by a druid named Sabrina and her bear Suzy, cleared all the brigands. However, the brigands had laid dozens of traps in the area. Bags, treasures, even common reagents like volcanic ash and ginseng—all trapped. Lots of blood and death reported; Ruxem refused to elaborate (though he did have very nice things to say about Suzy). 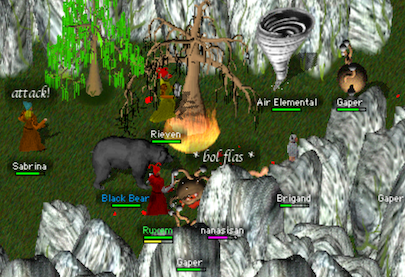 As for the identity of the culprits, no further clues were found, only a note reading, “Use TRAPS. Mission complete in a few days. The lock is holding well.” What that mission is, is still unclear, but given how long the dwarves have been mining, they have surely harvested a massive supply of ferrite for their oppressors to use. And as revealed in Lillium's earlier report, it is clear that the oppressor is not, in this instance, the Jealous Jalux. But it is someone who knew J.J. well enough to purchase his Magma Golems, and at the “same price as usual”, implying a longer relationship. We would do well to look into J.J.’s old allies. (I also cannot help but wonder about the going rate for a Magma Golem, out of base curiosity if nothing else.)

“451/10/153
Creatures of shadow eliminated from their perch outside the Foehan Voidgate. Arcane sleep ritual found at the source of the aberrations.”

Your guess is as good as mine here. After finally receiving your call for help, and debriefing Ruxem at the Vale, I set out for Foehan alone. Along the way I met Pur’el and the rogue Platus. Together, we defeated the poison beasts, blink hounds, skeletons, black dracos, and wraiths. They had been congregating around some eerie forest clearing surrounded by dead trees and ominous tombstones, enshrouded in a thick fog, as you saw yourself. At first we thought it was poisonous, though this proved to be false. Instead—and I might have been imagining this—I started to feel sleepier upon coming into contact with the fog. Inside its reach were a number of creature laying in the final sleep, including, even, a human. I could not make out any identifying features on the body, but I could read a faint inscription on the nearby tombstone. All it said: “Stay and sleep. Yield to the powers of Sopor.” Sinister is the only word for it, my good sir. 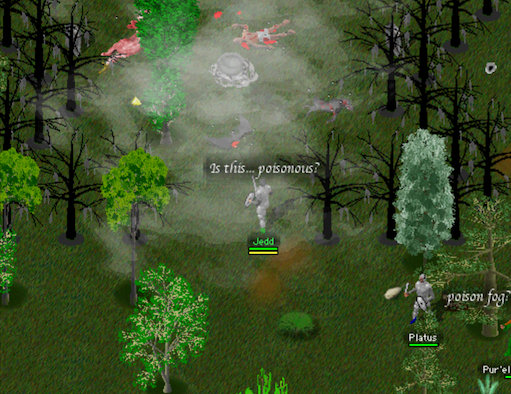 I was rather exhausted after the previous adventure (effects of the “Sopor” ritual, perhaps?), and thus decided it would be best to send out those messenger bats. Stryker, Breigje Balloc, Ryen, and Platus ended up taking the mission. They were joined at the battle’s end by Nial and Malthaen. The gruesome display of horribly mutilated mage corpses on pikes, and the notes indicating that the mages were being hunted for their heads, were enough for the combatants to identify the fort’s creator as J.J. himself. Brigands, lava spiders, bracken, bone mages, and snakes all found on the scene, but no Hell Mages, as the bodies had not yet been corrupted. Ms. Balloc is reported to have sanctified the grounds afterwards, in the hopes that it might prevent the fallen mages from becoming J.J.’s next abominations.

All of this, so close to our operation… maybe it’s coincidence, or maybe Jalux thought he could catch some easy prey. Whatever the case, it’s clear that we need to bolster our defenses. 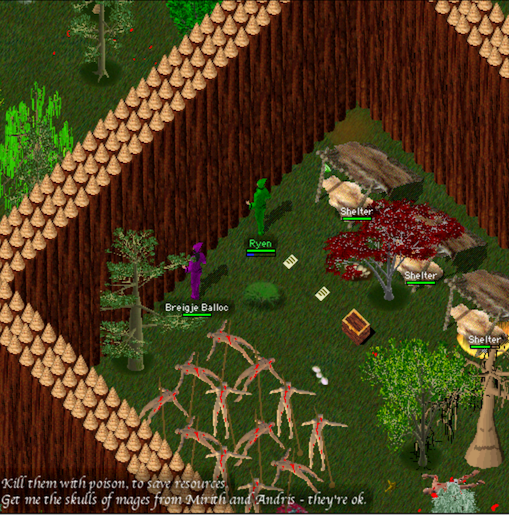