Greetings from Marali—it seems I have just missed you again, what luck! Your letter has provided me with ample entertainment, and now I shall have to return the favor with a tale of my own (though I cannot promise it will be quite so tall as yours). We will need to call a meeting as soon as possible, as there is much to discuss, and many theories to explore. Until then, however, I shall record the details of my wonderful little adventure as best as I can remember, so that your transition back into your mess of an office might go just a little bit more smoothly.

It all began on the morning of the day you were scheduled to return to us at the Vale, Day 199 as you will recall. I had not yet finished breakfast when word reached us that our friend nanasisan had run into some trouble on the other side of the mountains. Doubtless you will have already been informed how I rushed off to investigate and assist our friend and ally. After borrowing some of your rings (my apologies, good sir), I followed a coastal route to GYPSY to avoid the chaos in the Valley of Tribulations. When I arrived in town that afternoon, I was greeted by the smell of fire, and quickly found Laricen, nanasisan, and peven, the three of whom were leading a golem around in a merry chase. The thing was barely standing by the time I arrived, and was heavily charred by the wizards’ fireballs. We made short work of it and they filled me in on the situation. 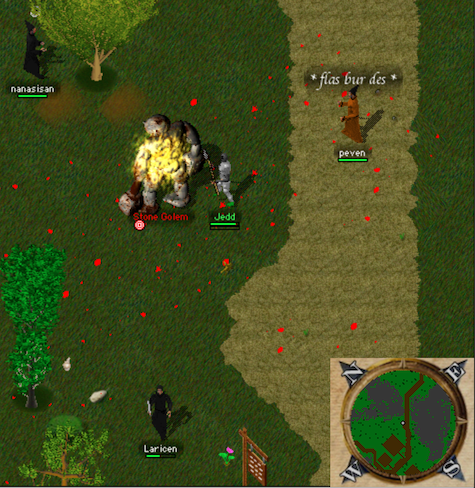 On the western part of town, it would seem that a small group of brigands had barricaded themselves behind a wall of shelters and bracken. The good peven had astutely discovered a narrow passageway that allowed us to circumvent the bracken, and we took full advantage of this to ambush the brigands and cut short their disruption. Laricen and I searched through the bodies while the wizards incinerated the fell trees from behind. Curiously, each of the brigands seemed to be carrying some type of crafting tool, and I recall that one of them was even decked out in red robes—though we believe this redcoat may have escaped in the frenzy of battle, as the robes were nowhere to be found.

Anyhow, once the coast was clear, we turned the bandits’ shelters upside-down and found some supplies and an unusual note. The note read: “OBS: prepare bords&ingots already. We don’t have time for that here. R says golems collect materials 4 little ones. B discreet. Camouflage w trees.” We were left scratching our heads at that, but came up with some theories after reviewing the supplies that were found. The supplies: 900 ingots, 900 boards, 300 mining axes, and curiously enough, 300 leather belts and 300 pairs of gray boots. And then the theories: peven suggested that the brigands might have been trying to make baby golems, which would help to explain the “little ones” mentioned in the note. I postulated that perhaps they were trying to make wooden golems, given the boards. Nanasisan noted that a wooden golem would be quite weak, and I concurred - it would probably only take a single one of his fireballs to put an end to such a bizarre contraption. Not finding any other leads, we decided to report to Mirith, and thus I was left to lug all the raw materials back that way. 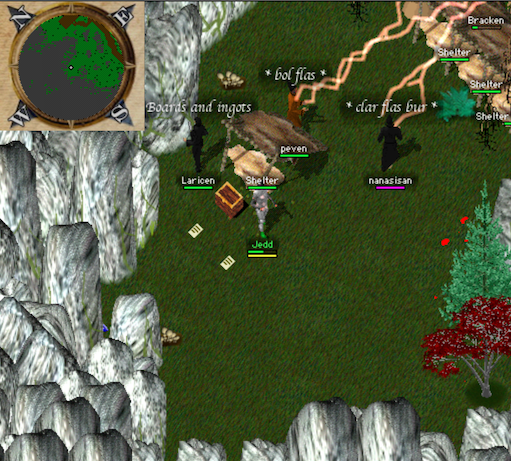 (A sidenote for you: somewhere along the way, peven mentioned that he had encountered both trolls and forest trolls in the Lerilin woods. Both he and Laricen confirmed that neither of those creatures could normally be found in that area. It’s been so long since I’ve roamed that continent, that I could not properly tell you. But as it happens, peven later went on his own and investigated the ant cave, as the trolls seemed to be coming from there, but he found nothing amiss.)

So all in all, eight heads were gathered for the Maralian bounty—troubling, but not at all a large force. As such I wonder if there are other brigands that escaped our notice. Surely a project as intricate as golem construction would require a greater labor force than eight swordsmen. What if there were others who were still camouflaged, watching from the trees while we mulled about? I shudder to think of it.

Now, there is one last footnote to this story: the day after the adventure, I decided to accompany Pur’el on an errand to Marali, so that I might pick up some more rings and repay my debt to you. We decided to walk there, and followed the river up from Foehan, fighting through all the native lions and bears and brackens and blink hounds. But much to our astonishment, just as our journey was nearing its end, we were ambushed by a female privateer with the most beautiful seaweed-green hair, just south of the hall of the mysterious A.R.R. Unfortunately, we were forced to defend ourselves. I attach another sketch below for your records. 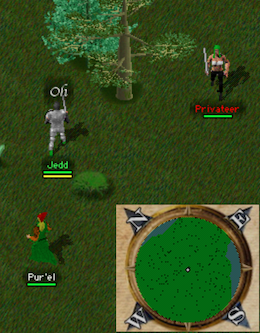 I’m quite unsure what to make of this particular incident. We took it upon ourselves to comb the beaches, but found no other clues as to who she was or what she was doing there. A guest of the A.R.R.? A lone wolf? One of the Gellansha? I sure hope not, as it would be nothing short of tragic if we did anything to upset the good Miss Falvo in any way, shape or form.

And thus concludes my report for you today, my good sir. I will be seeing you very soon, but until then, farewell!