(Zaji): !
(Rosina): is it the ghost of the CHristmas past?
(Morry): Something going on in foehan?
(Rosina): no idea pal
(Bronte): There were no clues, Morry
(Bronte): Just body 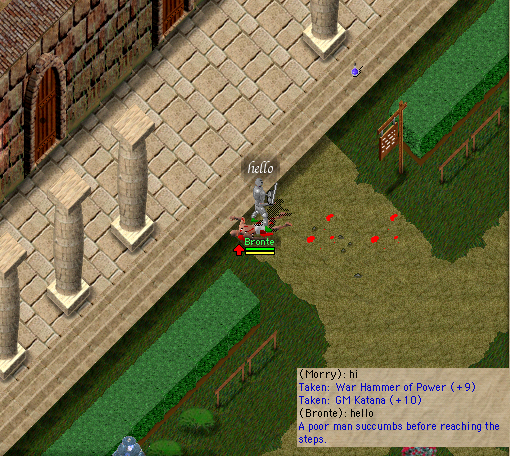 The gaze of all present fixated on the corpse at the very edge of the bank's steps. A shortbow, robes, no plate armor, most likely a Scout... The poor fellow succumbed to his grave injuries, leaving no clues besides a trail of blood leading towards the city’s Eastern gates.

Rosina, Zaji, Mikomi, Morry, Varto, Stryker, Satyricon and myself had gathered for our recurring adventure, awaiting Hayate's arrival but shortly received word that the fighter was preoccupied and unable to join us. By the look of things, today's adventure would be connected to this corpse, whose blood had began to dry.

And follow the tracks we did. Each successive splatter more moist and larger in size than the previous, staining nearby flora a repulsive red, with the excess dripping into the parched ground, which readily absorbed the liquid and its stench. The scout’s trail led us past the city’s gates and the Mirithian Portal, in the direction of Foehan. His ability to survive just until he arrived the city was nothing short of a miracle given the volume of blood that traced our route. 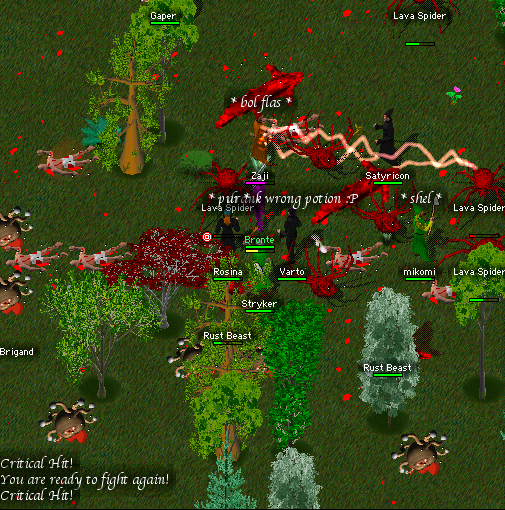 The bulk of his blood pooled into what we surmised to be the enemy's main line of defence, undoubtely where he sustained the fatal injury. The first wave of mobs consisted of equal number of Brigands and Gapers, backed by Rusts Beasts, Lava Spiders. Odd. Even more curious, these creatures approached from the direction of the temple that enclosed a rather large portal in the heart of the abandoned town. The absence of human activity in Foehan likely made it an attractive site for anyone up to no good.

With no rangers in our ranks, we stopped short of the temple, Stryker and Varto scouting further to reduce the odds of an ambush. They returned with a Magma Golem and Hell Mages on their heels, advising us to prepare for a long fight as more terrifying creatures lined the path ahead. As luck would have it, Haruko caught wind of the situation and made her way to us. We inched closer, dealing with Wraiths, Liches, Phase Serpents, and more Magma Golems along the way. 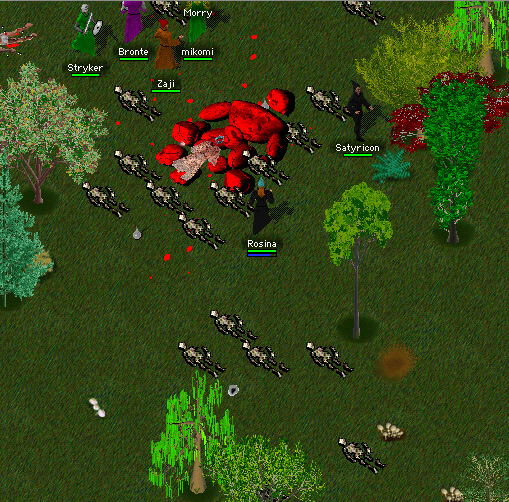 We finally arrived to find the temple fortified by shelters and brackens. More Brigands and Gapers emerged from the shelters launching coordinated attacks to prevent us from accessing the temple at all cost. The Gapers teleported the injured amongst us closer to the brackens, trapping the ghosts of our fallen brethren away from clerics and reducing our attacking force. I retreated to safety, away from the bracken grove as my Robe of Resistance approached its limit. Shivani, who arrived a few moments ago, charged ahead with the other mages, eventually restoring order to the area. The portal inside the temple housed short note, a tattered tome, and two chests containing enough regents, weapons and armour to sustain a sizeable troup. The Tome, a very old theology book on Elara and her disciples, disintegrated with the slightest of touch, leaving nothing but smoke wafting eastwards towards the river. I glanced at the note:

This is the strongest moon. We gather forces

The strongest moon... Waking Moon being associated with strength? Bleeding and Fighting Moons certainly, but Waking Moon? Perhaps this deceptively simple letter concealed another message, understood only by its intended recipient?

None of the recovered items brought us any closer to identifying the culprit(s) but bits and pieces of today's event were eerily familiar. The disappearing tome was reminiscent of the books spotted underneath Marali during the disappearance of Commander McTyr. The appearance of residents of the Volcano via a portal, also similar reports from Gohoran and Rock Maze few years ago. On our way back to Mirith, we noticed the green portal was overrun with a flock of shrieking pixies. Shivani later informed me the lot gathered to set off some fireworks in Foehan. Given their size and temperament, it is unlikely they were responsible for the mayhem we just encountered, but I shall reserve my judgement until we have eliminated other credible suspects.