Bronte
June 2019 edited June 2019 in Role Playing
I was exchanging pleasantries with some familiar faces at the Mirithian Bank when a fellow by name Z. R. Naut approached. How are you all this lucky moon? he quipped, swaying his right arm and drawing attention to an axe he had found earlier in the forest on his way to town. 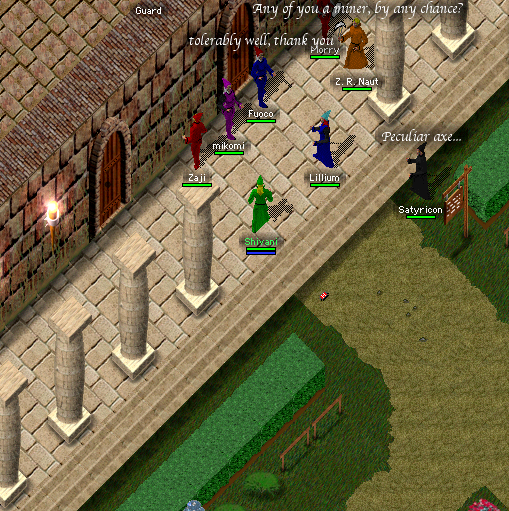 He inquired if any miners were present within the group to investigate the tool, a Dwarven Mining Axe. The axe, he claimed, possessed the same ability as its lumberjacking counterpart, the Dwarven Hand Axe. It supposedly enabled miners to extract twice as many ores, piquing the curiosity of all present.

(Morry): Better give it to me it looks dangerous

 
Shortly after he disappeared from the bank steps, a Mirithian scout arrived bearing alarming news from Andris, which he related in the ensuing conversation. 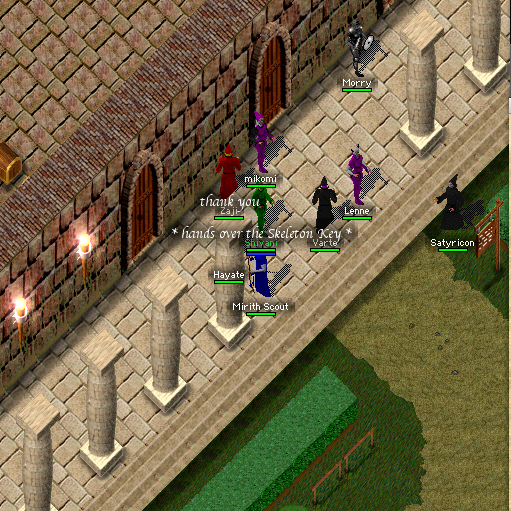 (Mirith Scout): Greetings all and sundry!
(Morry): Oh my it's a parade!
Mirith Scout): I bring grave tidings on this auspicious evening.
(Lillium): lots of activity at the bank today
(Zaji): oooo
(Fuoco): * wonders what is auspicious about it, then *
(Fuoco): pray tell us

((Fuoco): I knew I should have not left town!
(Zaji): kyouwa mazu andris dane
(Satyricon): Shadowy organization, huh
(Mirith Scout): They are known primarily as the "Creed".
(Fuoco): ugh!
(Mirith Scout): And were infamous for their operations around Marali in decades past.
(Fuoco): fanatics hey?

(Fuoco): horror!
(Satyricon): So.. What's the bounty of these... criminals? *He taps a finger on his coin purse*
(Varto): yikes
(Lenne): ooo
(Mirith Scout): As such, it is suspected that they are also the ones behind the oddities in that region.
(mikomi): mazika-
(Satyricon): I mean... that Mc Tyg person do sound important... I'd assume the bounty would be high
(Mirith Scout): Namely: liches.
(Fuoco): confound them!
(Zaji): ty
(Mirith Scout): As for the Commander, his safe return was already guaranteed.
(Shivani): (:O yellow leather arms back!)
(Fuoco): Let me go call my niece then
(Satyricon): ah... *He sounds dissapointed*
(Satyricon): yes.. very good
(Mirith Scout): But if the brave adventurers of Mirith are willing:
(Mirith Scout): We may get to the bottom of these mysteries after all.

(Zaji): ok hayatyan
(mikomi): ou
(Hayate): skelton key
(mikomi): akuto iine-
(Mirith Scout): And our thanks to you all, fearless warriors.
(Satyricon): *He nods once *
(Mirith Scout): I must not tarry. There is much to do.


I called on Bronte to accompany the group in their mission before heading off in the direction of the Marali Forest, hoping to find one or two Dwarven Mining Axes myself. 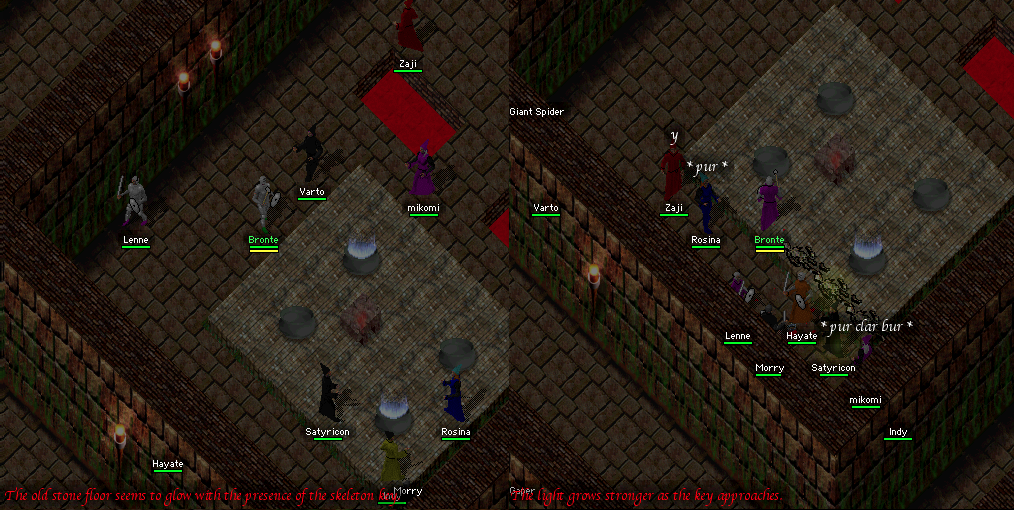 During the skirmish, they noticed the floor glowing, its intensity increasing as Hayate approached wielding the Skeleton key. He placed the key on to the shining surface, which caused a restructuring of some bricks in the southwest corner, revealing a ladder to the Creed’s Lair.

Bronte descended down the ladder into a library enclosed with an arc-shaped path. A pair of Black Dracos and a Bone Mage approached from the North. Something about this lair, particularly this mob combination, reminded him of that oddly shaped dungeon directly southeast of the Mirithian Cemetery, whose name he could not recall at the moment. Just missing Liches, Magma Golems, and a citadel ... he thought. He picked up the pace to join the others edging closer to the northern door whence the Dracos appeared but the room was a dead end. 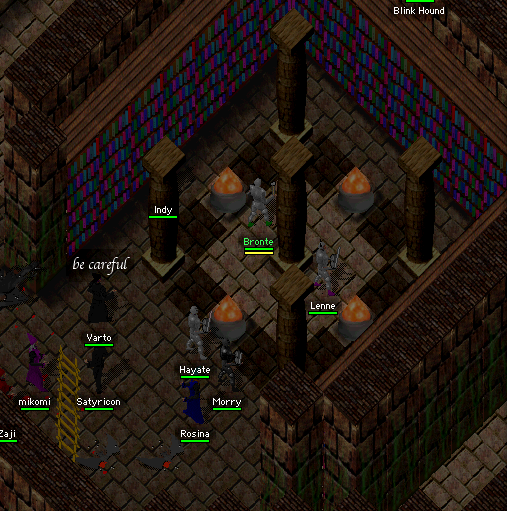 The party returned to the ladder, split into two groups and traced the path encircling the library, some taking the left side route and others the right. Finding no connecting branches or rooms along the path, they reassembled at the peak of the arc in front of a door, which seemed to be the main entrance into the Lair. At least half a dozen Bone Mages, few Black Dracos, Poison Beasts, Bats, Spiders, likely from connecting rooms, stormed the door prying it open and attacking all in their line of sight. The adventurers were so preoccupied with these foes that they failed to notice the stranger among them.

The faint voice of a barely clothed, frail figure whispered before slipping into unconsciousness, leaving behind no trace. No corpse. No ghost. No clue as to who they were, why they were here or that they even existed mere seconds ago. From the looks of things, they were likely held here against their will. Perhaps an unwilling participant in one or more of the Creed's grusome experiment(s)? 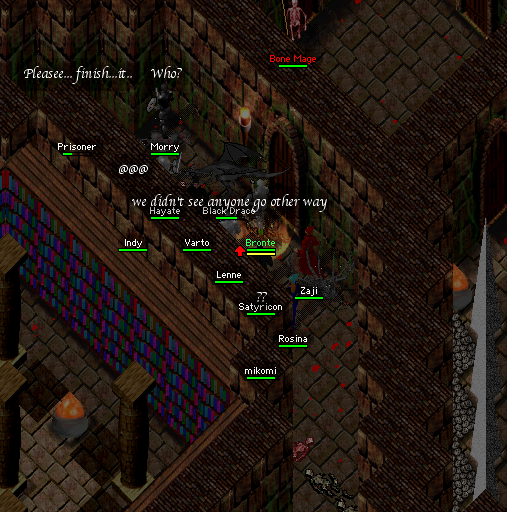 The group advanced into the room directly in front of them, which was flanked by four doors, each leading to different paths: one to the north, another east, a third south, and the fourth west from which they entered. They deliberated on the direction to proceed while keeping the swarming foes at bay: plates fending off Black Dracos, wizards parrying spells from Bone Mages and returning fire while erecting firefields at each doorway to secure the room, clerics safeguarding the lives of the party.

They finally opted for the southern room as it seemed more calm, dashing in before the firefields holding back the mobs from the other rooms were extinguished. The wizards secured the door behind them with another pillar of fire. The room was quite spacious, featuring a long dining table with several goblets, a chess board, piles of skulls, and pillars typically found on the boundaries of a portal.

Familiar laughter echoed through the room, redirecting Bronte's gaze to two Liches guarding a chest towards the back, who chaotically teleported themselves to the center of the room, summoning some skeletons to their aid, thus beginning the battle. Clerics reflexively casting magic reflective shields, fireballs from friends and foe alike traveling across the room, fighters, in their Robes of Resistance, either assuming defensive stances or in a state of rage. The liches healed themselves in response prolonging the fight but ultimately met their end.

Morry, the rogue on duty, recovered a small moon fragment and pure infused yellow crystals from the chests, ingredients for enchanting a Ring of Shadow. Exhausted, and low on supplies the party decided to return home and plan an expedition for another day. Perhaps a consultation with Jedd the Historian regarding an estimated date for the full fighting moon may prove fruitful Bronte thought as he exited the cave.
Sign In or Register to comment.