Bunny informed the party about a gang of trolls, including the forest Trolls of Welif, assembling at the Tree Maze, no doubt, in preparations for their annual burning golem festival. Quite early... it was only Day 92 and the Dancing Moon, barely past its first quarter, he pondered. The group, including Matthias, Zaji, Kiearah, Mikomi, Varto, Indy, Hayate, Morry, and Bronte himself, was bound for Skull Dungeon to aid in Holtrer quest for Black Roses. After much deliberation they opted to first complete the quest and head to the Tree Maze afterwards.

Upon exiting the dungeon, Bronte reached for the parchment tucked behind his plate breast. Northeast... Perhaps more north than east? he muttered while consulting the map Shivani had gifted him several moons ago. Orienteering had never been his strong suit. He quickly folded the parchment, trailing behind Indy, who seemed to have a more reliable sense of direction. 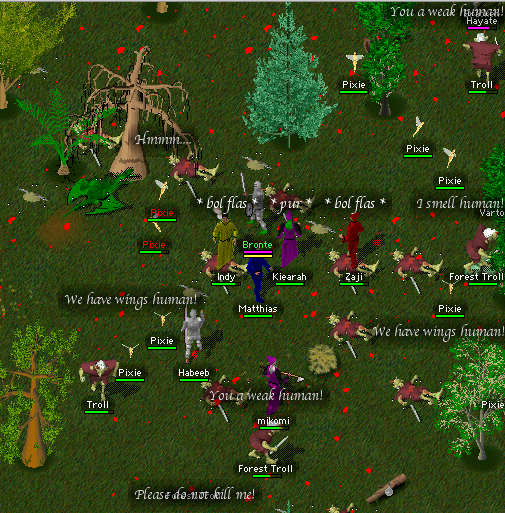 The group, now including Rangers Rivvyre and Habeeb, approached the outskirts of the maze to find trolls and pixies among the regular occupants. They also noticed lots of brackens and dracos nearby, significantly more than the norm for these parts.

We have Wings human!

I am too fast for you!

The shrieking mobs strategically engaged the party: pixies and brackens poisoning, unleashing lightning bolts and other offensive spells on those clad in plate, while the trolls thrusted their broadswords at the mages, forcing the clerics to wield their silver weapons in defense. After suffering some casualties, the group retreated to Serpent's Pass to restock potions while formulating a plan of attack to rescue fallen members before eliminating the rest of the mob.

The second attempt was successful and the wounded trolls fled Northeast towards a makeshift fort constructed from some tents. A sign post at its entrance, welcoming participants to the festival, gave way to two hefty chests: an icy one, likely containing perishable items for the festivities and a wooden one whose contents were secured by Morry. 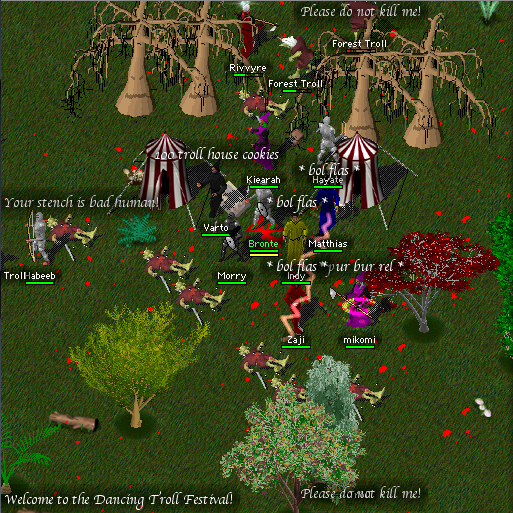 The party searched for Magma Golems often associated with the Troll Festival and having found none continued in the direction of MR dungeon. Bronte thoughts drifted as he followed the winding path, wondering if absence of golems this year was related to the incident at the Mirithian Atoll. Were the trolls unsuccessful in obtaining Magma Golem(s) this year because the Golems had already been poached for the Atoll's fort? Did they simply, albeit coincidentally, opt for inviting pixies instead because they needed a change of pace? Was the festival held earlier than usual because the Trolls had other commitments?

"Dragon!" Kiearah yelled. He looked up to find himself next to the what was left of the former MariRangers guild hall, his companions attacking a Forest Dragon just few paces ahead. He unsheathed his sword and assumed a defensive stance, saving his thoughts and questions for his scheduled meeting with Shivani later on.